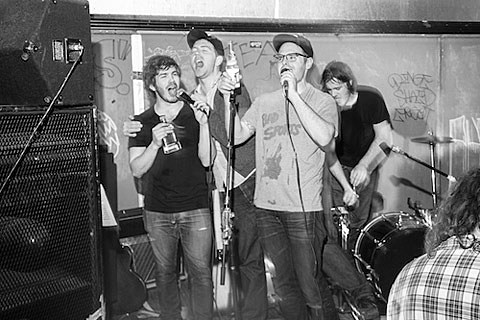 Pittsburgh's The Gotobeds is the new band from guitarist Eli Kasan and drummer Tom Payne of the great, mostly dormant Kim Phuc. After a cassette and a couple 7"s, the band released their debut album, Poor People Are Revolting, this month via Gerard Cosloy's 12xu label. ("12xu" is not the only Wire reference associated with the band.) From the title down, this is attitude-heavy, snarling, railing-against-everything punk-informed indie rock. If you dig Protomartyr and Parquet Courts (whose album gets slightly damaged in their video for "New York's Alright [If You Like Sex & Phones]") or Pavement or The Fall (or Wire), this is pretty much essential listening. You can stream the whole album and check out that "New York's Alright" video below.

You may have seen The Gotobeds at SXSW this year (or in Brooklyn in summer 2013) and while they haven't announced a full tour in support of the new record, we did convince them to come up to Brooklyn to open for the Sleaford Mods show we're presenting at The Wick on November 29. Tickets are on sale now and the rest of the night's lineup is still TBA.

The Gotobeds' only other show currently is a hometown Pittsburgh show at Planet Vegeta on October 9. Album and video streams below...