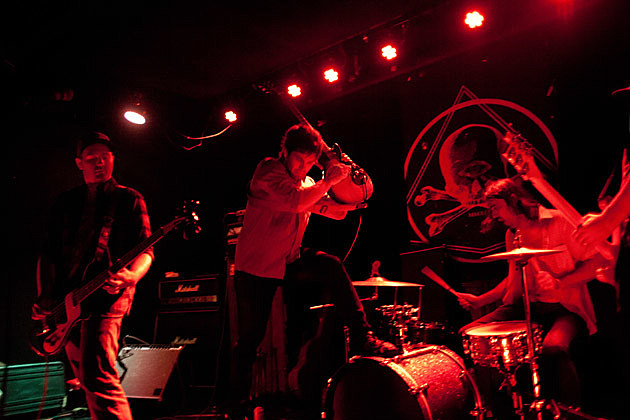 Pittsburgh smartass post-punks The Gotobeds will take a break from recording their first album for Sub Pop to be a part of the mayhem that is CMJ. They play four shows this week, including BrooklynVegan's all-day party on Saturday (10/17) at Baby's All Right with Stealing Sheep, and more to be announced any minute. We'll have bands from noon - midnight. UPDATE: HERE's the whole lineup. Here's The Gotobeds' CMJ schedule:

I cornered Gotobeds frontman Eli Kasan (via email) to tell us a little bit about their new album, what to expect from this week's CMJ shows, surviving festivals, touring with Protomartyr and more.

How many new songs will make it into your CMJ shows this week. Are there any specifically to look out for?

We'll likely be playing most of what will end up on the new LP, something like 12 new songs. We play what will likely be the single "Bodies" quite a bit since it's fun to play - you can tell when bands enjoy playing certain songs and that's one we all have a good time with. We will play "Sunny Youth/Clocktower" which is a really mean P.I.L. sounding-thing that slays at practice, We'll play "Crisis Time" since Greg from Protomartyr loves it. It has the classic lyric "blog bands don't have any use!" I hope we play "Red Alphabet" -- it's a little different for us, real moody 'Chairs Missing' Wire/Prinzhorn Dance School inspired stuff. It's tough to play for me so I'll have to have the right amount of drinks to have the courage and not too many that i'll fuck up the leads.

CMJ (and SXSW) can be grueling for bands, what's The Gotobeds' plan of attack? Are there any bands you're looking forward to catching?

Avoiding uppers is key - had too much cheap speed on our tour with Protomartyr. We watched a video of us in Philly and it sounded like the LP was being played at 45rpm.

Definitely excited to see our boys in Froyo, we're all likely gunna hoof it over to see Dungen the first night we're in town. Bummed we'll miss both Savak and Hamish Kilgour.

Some other excellent acts we'll try to see if time permits: Big Quiet, Ex Hex, Sheer Mag, Shopping, Weed Hounds, Wildhoney and Xeno and Oaklander. And Car Seat Headrest, gotta see why Matador signed him and not us. Joking!

At the Sub Pop/Hardly Art showcase you're playing with Protomartyr, who you toured with earlier this year. Any anecdotes from the road?

Greg from Protomartyr has an abnormally large collection of 9/11 Truther-Movement songs that he jams on the reg. Ask him about 'em!

What's the Pittsburgh scene like these days? What other bands should we know about?

Check out The Sicks! It's Rob and Corey who were in Kim Phuc with me and Tfp. Great live band. The other guys were in Caustic Christ/Aus Rotten and the Bats (PGH, not NZ). They're doing a straightforward punk thing.

Your name comes from Wire's drummer, and you guys clearly love the Fall. What's the most underrated Wire album? What's the best Fall album?

Colin Newman's "A-Z" LP which can still be had for a song, though that answer is kinda cheating. Always loved Document and Eyewitness but still cheating since it's a compilation of sorts. I really enjoyed both Red Barked Tree and Wire. Those last two have some really great songs. but they'll always have the burden of history looking over their shoulders.

My favorite FALL LP changes, Hex Induction Hour is an obvious answer, same with Grotesque. I've always jammed the maligned Room to Live and think it's great but lately it's been Perverted By Language. Stuff like "Garden" and "Tempo House" are such great songs that churn along at their own leisure and the record has some of the best lyrics on it.