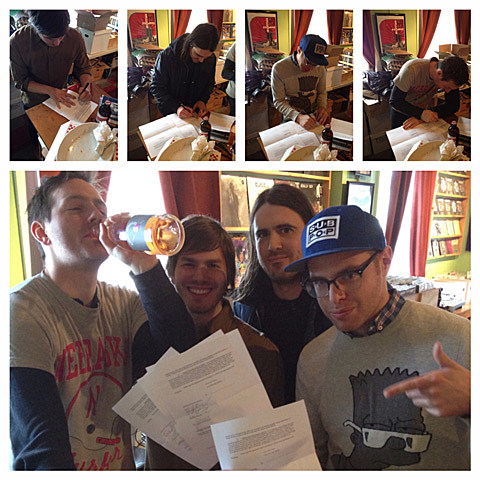 Pittsburgh's The Gotobeds have inked with Sub Pop who say "keep your ears open for new music in the near future." That's them signing their life away, above. If you haven't checked out 2014's Poor People Are Revolting, which came out on Gerard Cosloy's 12XU label, here's what I wrote about my #5 LP of last year:

From the title down, Poor People are Revolting is attitude-heavy, snarling, railing-against-everything punk-informed indie rock. The Gotobeds (featured a couple members of Kim Phuc) play like Protomartyr's smartass younger cousins, armed with punny titles, big hooks, shouty choruses and a love of The Fall. If you dig Protomartyr and Parquet Courts, this is essential listening.

You can stream The Gotobeds album, and check out their new video for "Affection" and their full performance at The Wick (opening for Sleaford Mods) back in November, below.

Next week is the start of The Gotobeds' tour with Protomartyr (who made my #1 album of 2014), which hits NYC for the BrooklynVegan-presented show at The Wick on April 15 with Grooms on the bill as well. That's a great show! Tickets are still available, but if you'd like to go for free we're giving a couple pairs away. Details below.

Protomartyr, meanwhile, will head to Toronto after the Protobeds tour to open for METZ at their two hometown release shows celebrating their new LP (part of Candian Music Week 2015). All dates for Gotobeds and Protomartyr, plus streams and videos and the flyer for The Wick show, below... 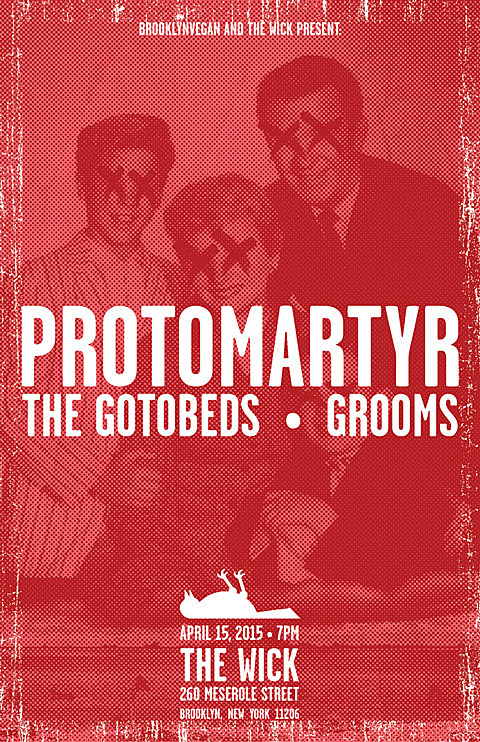 ======================
For a chance at winning a pair of tickets to see PROTOMARTYR at THE WICK: either tweet something that includes both @BrooklynVegan AND "Protomartyr at The Wick" in the tweet, or send an email to BVCONTESTS@HOTMAIL.COM with the subject line "PROTOBEDS". Include your first and last name in the email. We'll pick a winner at random and contact them with more details. If you enter by email, it will not be shared with anyone else. Good luck!
======================