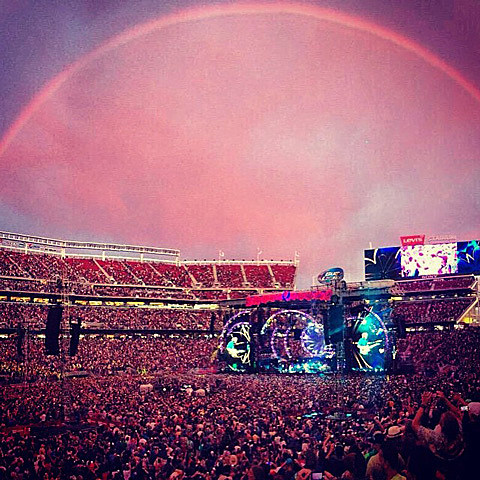 "I can't tell you how good it is to see all of you all again, this has been so magical for us," Lesh said before delivering his well-known donor rap before the encore. Bruce Hornsby finally handled lead vocals for a rousing rendition of "Casey Jones" that closed out the first night. After the music ended Billy came to the microphone to acknowledge the rainbow that formed at setbreak and tie it into the Supreme Court decision regarding gay marriage on Friday.

Who would have guessed during the "Truckin'" opener that it would be the most recently introduced song in the Grateful Dead's repertoire? With a nod to the early days of The Dead, this group trying to overcome first-night nerves and meet lofty expectations, if nothing more made the anticipation for the next four shows even stronger than it had been before. -[Jam Base]

The first of The Grateful Dead's "Fare Thee Well - Celebrating 50 Years of the Grateful Dead" shows happened Saturday night (6/27) at Santa Clara, CA's Levi's Stadium, featuring the "core four" (drummers Bill Kreutzmann and Mickey Hart, bassist Phil Lesh and guitarist Bob Weir) as well as Phish's Trey Anastasio, plus Bruce Hornsby and Jeff Chimenti on keyboards. This was the first time this band had played a concert together and some kinks were working themselves out, but a rainbow forming over the stadium between the two sets was surely a good sign. The show opened with a jam that soon turned into "Truckin'" and the setlist stuck to the band's early days, wrapping up with "Casey Jones." Setlist is below. Pictures ARE HERE.

The second of the Santa Clara "Fare Thee Well" happens tonight (6/28) and then next weekend they move to Chicago for the final three.