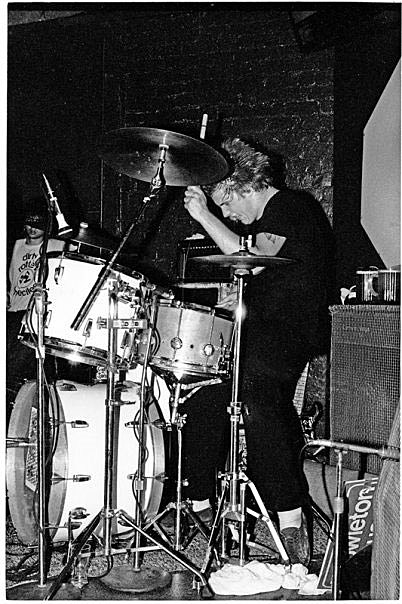 I can now say with 99,99% confidence that legendary drummer Chuck Biscuits is in fact alive and well! So what the hell happened yesterday? How did the rumor that he died of throat cancer start? Why did everyone believe it? Well, before the chain reaction of irresponsible blog posts and news stories (guilty), it all began with one James Greene Jr. James, according to the Boston Herald (one of the sources I read before posting myself) (and whose story credits Blabbermouth), is "a freelance music writer from Brooklyn, New York".

Though I didn't completely realize it at the time of my own hasty posting, James's Chuck Biscuits obituary was THE source of it all. Before I re-posted his words I had read about Chuck's death - in addition to at the sources mentioned above, in the BrooklynVegan comments, and was told about it via an IM, and saw that someone had updated Wikipedia with his death info (reliable, I know), and noticed via Google that Punk News had even put a "-2009" after his name and date of birth. The news was spreading fast. By the end of the day, at least 50 websites had reported that Chuck was dead.

At first glance James's blog post seemed super legit too. First of all, who would make something up about Chuck Biscuits? (Lars Ulrich maybe, but Chuck Biscuits????). It was a well thought out obituary which even sourced Chuck's family members (a "mass email" even), and (ironically) the post was tagged "Shit That Can't Be Real Yet Somehow Is"!

Before I continue, I want to look at the bright side. I can't remember the last time I thought about Chuck Biscuits, and though sad, yesterday was a nostalgic trip that had me listening to, and reading about, Danzig, D.O.A., Black Flag, Social Distortion, and many of the other related bands that Chuck played in. The Internet was celebrating Chuck Biscuits, and I found myself in interesting Biscuits-related places like the website of Sudden Death Records, the homepage of John Christ, the Twitter account of one "Tim Napalm Stegall", and Otis Link's MySpace.

I feel dumb for being one of those who reported that Chuck died, but I had fun during the process of trying to prove it wrong, and that included learning more about James who really did believe that Chuck was dead. I feel bad for him. He thought he had been in contact with Chuck and his family since May, but now it seems that he was actually just the butt of someone's very cruel practical joke. Most random practical joke ever? Well, not totally.

First look at the topics of some of James's past published work. Here are a few highlights:

You get the idea. James is a big Danzig fan! Danzig drummer Chuck Biscuits is a "hero of [his] musical youth".

Second, as James started to realize that he was duped, he wrote:

"I know plenty of people who severely dislike me and would take any chance they could to play on my gullibility to make me look as stupid as possible (i.e. e-mail me for six months pretending to be a dying drummer I admire)."

So, he's obsessed with Danzig, he's gullible, people hate him, AND...

"I spent a good chunk of '08 searching for Chuck and info on Chuck. All I got was Bill Goddamn Stevenson. No one was talking.

I wrote a thing about Biscuits anyway and then, out the blue, some fucker calling himself by that name who looks like the guy on the record sleeves starts corresponding with me. What the fuck am I supposed to do? Call shenanigans? Whatever happened to trust? Who would lie about being Chuck Biscuits? Especially to a piece of "vermin" like me on the lowest rung of the totem pole?"

(someone called him "vermin" in a previous comment). Okay, so someone that hated him knew he was looking for Biscuits, thought it would be hilarious to play a joke, and finally, months later, decided to end it with a really distasteful bang. And here we are.

Has anyone ever lied to you for six months about being a terminally ill hero of your musical youth? It's fucking weird. You think I wasn't devastated when I read the e-mail the other day that announced his "death?" That's why I wrote this blog in the first place. I wanted to give CB the obit I knew he deserved. I knew there'd be source questions, but what was I supposed to do, e-mail his "wife" back and be like, "Hey, can you send me pics of the body?" I had no suspicions. I thought I had this shit on lock down. Who would lie to a NOBODY blogger about this kind of thing for so long?

It's easy to attack me in hindsight, but again - this had been going on since May. Who the fuck lies about being a dying Chuck Biscuits for half a year? Are my friends/enemies smart enough to hack enough related e-mail accounts to perpetrate something like this? I just want to know how it happened.

I'd also like some more conclusive proof that Chuck isn't dead aside from e-mails from people whose existence I can't further verify.

Since he wrote that, it has been confirmed that Chuck is alive (though at the time of this writing, James has not fully recanted his story) (even by him). Straight.com talked to D.O.A.'s Joe Keithley, and I know someone that talked to Keith Morris. Both say Chuck is alive, well, and extremely confused which is consistent with the many other rebuttals that Tim Napalm posted to Facebook (from Joey Shithead, Otis Link, Chuck's brother and others). Amen, and welcome back Chuck.

(I know Chuck isn't in this video)