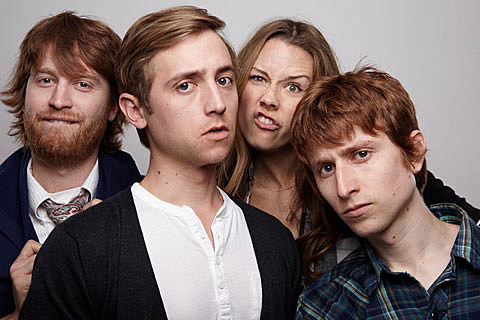 Music/comedy group The Gregory Brothers, who are known for the viral Auto-Tune the News videos (Bed Intruder anyone?), told us their ten favorite viral YouTube videos of 2012. You can check out each video on their list with commentary, and some of their recent hits, at the bottom of this post. Let us know what you think they missed, in the comments.

The Gregory Brothers will play their seventh annual Christmas show in NYC at Rockwood Music Hall on December 12 with Dusty Brown, Melanie Penn, and Sarah and the Stanleys. Tickets for the show are on sale now and all proceeds go to Sandy Recovery. They're promising "Christmas Cheer, Christmas Beer, Hot Toddies, Hot Bodies and music too!"

Sarah and the Stanleys is Sarah Gregory's band and Andrew Rose Gregory also has a number of solo albums out, having most recently released a covers EP over the summer, which featured covers of Bob Dylan's "I Shall Be Released," Simon & Garfunkel's "Only Living Boy in New York, Lana Del Rey's "Video Games," and more. You can stream the entire release below or purchase it for $5 on bandcamp.

Check out their Top 10 Viral Video picks, and stream Andrew's EP, below....

The Gregory Brothers' Top 10 Viral Videos of 2012
in no particular order...

"Edward and Bella" -- A Bad Lip Reading of Twilight

hard to pick just one, but Bad Lip Reading was amazing this year - honorable mention goes to his debate video, "Eye of the Sparrow"

--
Hot Weather in Richmond this Weekend

extra props for being our grandmom's weatherman.

--
Texting While Walking by Casey Neistat

an important PSA for the world, but particularly the new yorkers out there.

organizing a whole gourmand vacation around this one.

a college teammate of me & evan's is, sadly, playing defense in this clip.

In retrospect, Mitt Romney should've pulled the trigger on this. He had nothing to lose.

even the sheriff thinks this video is a great idea, though we demurred from watching the 12 hour version

The Gregory Brothers - OH MY DAYUM - NOW ON iTUNES !!!