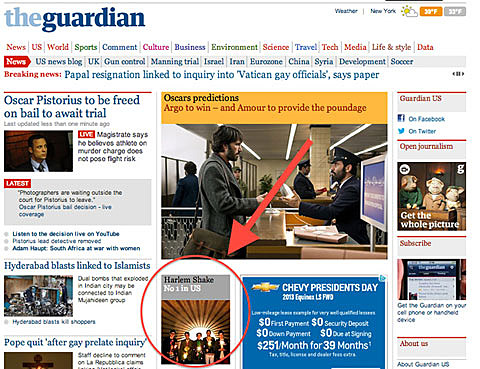 Not long after releasing catchy gem Technicolor Health in 2009 (stream it at Spotify), NYC band The Harlem Shakes,broke up. The album didn't break them through to the other side and there were many other life options calling their name.

Where are they now? Some of them still make music. We caught up with the group's guitarist Todd Goldstein who now writes, performs and records as ARMS and asked him. "Jose's finishing up grad school, Lexy's a writer, Kendrick has a family, and Brent is writing a novel and recording excellent albums as Thunder & Lightning. I'm actually in grad school now myself, too. We're all still in touch to varying degrees. Jose and I go to techno parties together on a regular basis."

More interestingly, I was entertained to learn via Buzzfeed that the Harlem Shakes are suddenly experiencing a sudden rebirth of sorts thanks to, yep, viral hit the Harlem Shake. So I asked Todd a few questions about that too...

BV: When did you first hear Baauer's Harlem Shake?

Todd: I found out about all this ridiculousness when my old Harlem Shakes google alert, which had been lying dormant forever, started blowing up on a pretty-much-hourly basis. I finally got curious and watched that first big video, the one with the costumed kids. The song is so generic I just sort of assumed it was a joke or some kind of obscurity, and the video seemed so tame I figured it was some kind of one-off. HOW WRONG I WAS."

How has the Harlem Shake craze changed your life?

Todd: It hasn't really changed my life so much as given my a funny story to trot out at parties. 3 months into the year, Harlem Shakes' old Twitter account has about 20,000 new followers and rising -- a mix of robots, old fans reconnecting, and (i'd hope) new fans who stumbled upon the band while trying to find another stupid dancing video. Lots of calls to reunite, a couple of offers to buy our Twitter handle, and the big one, in which the Guardian accidentally ran an old picture of us under the headline "Harlem Shakes - #1 in the US." We joked we'd "finally made it"... which was both genuinely hilarious and more than a little bittersweet. We've been broken up for 4 years! It's like someone famous having your name.

BV: Has all the new-found attention and Twitter followers inspired any reunion talks?

Todd: I doubt the band will be getting back together any time soon, no. We're all too deep into our own post-Harlem Shakes lives these days.

Bummer, however there are plenty of ways to currently experience ARMS. Todd says they "just finished a new EP we're quite excited about--it's really rough, catchy, more immediate than our last record I think. Self-recorded it over the last few months. We're playing Cameo on April 30th for the wonderful band Brazos' residency. Maybe some shows outdoors this summer? Mostly looking forward to playing some new songs live and writing another full-length as soon as I find some time."

Watch a video of Todd performing one of those new songs stripped down, below...