Agalloch at MHOW in August 2012 (more by Wyatt Marshall) 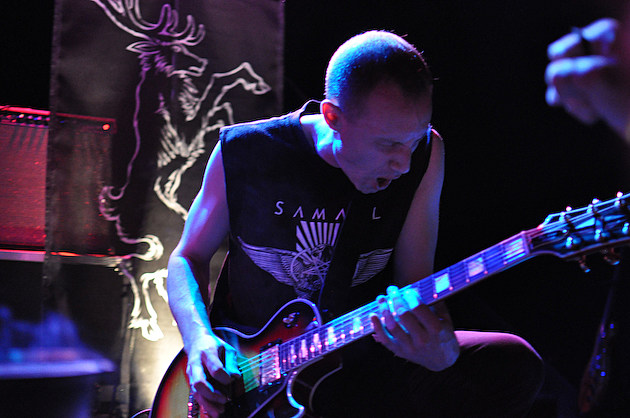 We are still recovering from SXSW (it was a blast, and we know you don't feel bad for us) but did manage to post photos of our Invisible Oranges showcase featuring Black Tusk, Mutoid Man, Kayo Dot, Yautja, Wild Throne, and Venemous Maximus. Check 'em out, and let us know if you went in the comments.

Despite the aforementioned SXSW hangover there were plenty of heavy happenings this week, which turned out to be a great week for new music. Black/grey metal kings Agalloch streamed a new song, "Celestial Effigy" off of their forthcoming album The Serpent & The Sphere, which is due out on May 19 on Profound Lore. After 2010's blistering Marrow of the Spirit, "Celestial Effigy" takes a step back towards an earlier Agalloch sound -- it has a similar lilt to "Hallways of Enchanted Ebony" at times. Give it a listen over at Pitchfork.

It happened late last week so it didn't make our HLD, but Tom G. Warrior's (Celtic Frost) Triptykon dropped two absurdly awesome and heavy tracks on everyone without any warning. Give them a listen below, and give a listen to another new Triptykon track that the band recently performed live. Triptykon's new album Melana Chasmata is out on April 15.

We premiered new Sargeist over at Invisible Oranges -- it's filthy, necro sounding black metal of the highest caliber. Look for Sargeist and the related, also Finnish bands Behexen and One Tail, One Head at the loaded Martyrdoom Fest at Saint Vitus from June 27 through July 1. Tickets are still available.

Metallica played a new song, "Lords of Summer," live in Colombia at the beginning of the week, and a couple of days later, a "Garage Demo" version of the song was posted to Youtube. Give it a listen it below.

As usual, there are a few good shows to check out this weekend. Tonight (3/21) at Saint Vitus, loud as hell creeps The Body play with Theologian and Couch Slut , and on Sunday (3/23) NOLA sludge masters Thou invade Vitus with support from black metal acts Anicon and Vorde and the punked-out Skelptarsis. Tickets to both shows are on sale. Over at The Acheron on Saturday (3/22), Swedish old-school death crew Obliteration will level the place with help from Fantom Warior, Flesh Temple and Iron Force. Tickets are on sale.

For a little further down the line, Florida sludge trio Floor announced a tour that will land at Saint Vitus on 5/5. Floor also streamed another song from their upcoming album Oblation, due out on April 29. For all upcoming heaviness, visit the NYC Metal Show Calendar. It rules.

Over at Invisible Oranges, we ran down all the metal that came out this week worth buying, reviewed the new Coffinworm album, and talked to Ringworm on the Invisible Oranges on East Village Radio show, during which we also gave away tickets to the Children of Bodom / Halo of Blood North American Tour stops in Charlotte, NC and Silver Springs, MD.

Triptykon and Metallica streams below. Anything else?