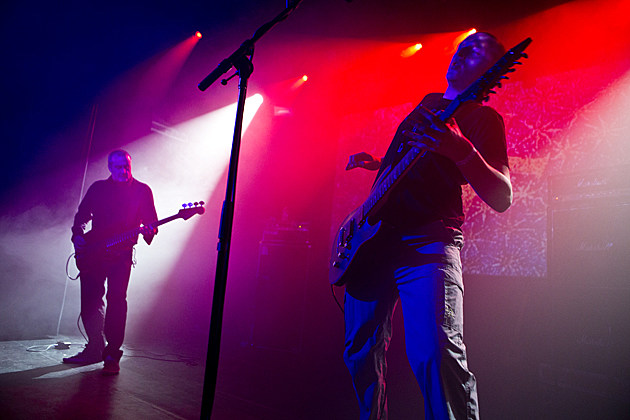 After finishing up a successful North American run, Godflesh will release Decline & Fall, a new EP of four songs, on May 26 through the band's Avalanche Recordings. Excepting a 2013 flexi single of a Slaughter cover, this will be the duos first new material since 2001's Hymns. Your 'oh god, I'm old' moment for the day: babies became teenagers in the years between new Godflesh tunes.

That said, Opeth fans will have to wait a little longer. Fans were promised a single and details on Pale Communion, the forthcoming 11th album for the proggy blarghers out on Roadrunner Records. It was originally slated for June 17. Now? August 26. (Godflesh fans: "Oh, cool, a couple months.") Per the outfit: "Several circumstances prevented the band from delivering essential tools to Roadrunner in time which are needed to set up the album release properly and release schedule conflicts made us mutually decide on August instead of June." Those circumstances? Probably the damn runaway wheel again.

Pilgrim is making a pilgrimage (stop groaning) across the United States with fellow doomers Age of Taurus. The group is supporting their recently released II: Void Worship, an epic doom tidal wave of sonic destruction. The tour will finish up June 25 at The Acheron with Holly Hunt and Blackout joining the bill as well. Tickets are on sale.

Also coming up at The Acheron? Malignancy! Yes, the masters of the pinch harmonic and incredible death metal stage banter will swing in with Goemagot at The Acheron on June 28. Tickets are on sale for that too.

In other touring news, Negura Bunget are not. At least, they're not touring North America after visa issues forced them to cancel their jaunt which was to have hit Saint Vitus tonight (5/9). The European dates of their world tour are still on, as is work on their next record. Says the group: "Meanwhile weíll focus all our frustration energy into completing the last details of the new album, Tau." The quirky Romanian black metallers have had a rough go of it lately, restocking the membership in 2013 upon the departure of most of the outfit to Dordeduh. Drummer Negru is the sole remaining member.

Speaking of Europe, perhaps BL'AST! and Bunget will cross paths. The reformed crossover neck-snappers will keep the comeback rolling with a European tour. Filling out the ranks are desert vets Nick Oliveri and Joey Castillo. BL'AST! will also be making select North American fest dates, including This is Hardcore. 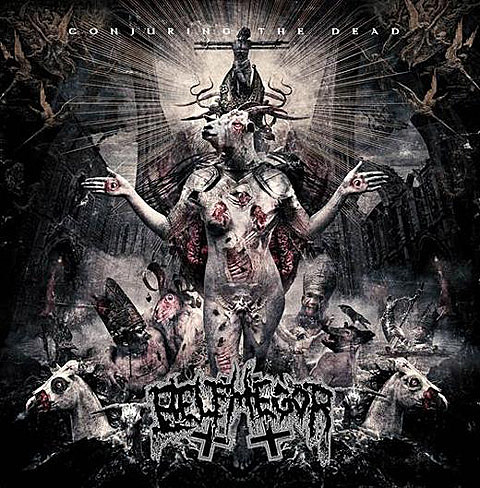 Belphegor are back, circling August 8 as the date for Conjuring The Dead, which will be available via Nuclear Blast. It's the band's tenth LP and was produced, as most things are, by Eric Rutan. The Austrians have released the cover art in advance and it features the most blasphemous depiction of Mickey Mouse ever. See if you can spy it.

Shining -- the other one -- have signed to Season of Mist. The depresso bleak metallers will issue something new for the label in 2015. Shining brain Niklas Kvarforth: "After a long period of negotiations and discussions that lasted almost eight years, I have now chosen to grant Season of Mist the privilege of releasing the next Shining album." Eight years? But Niklas, YOU'VE ALWAYS BEEN THE CARETAKER.

If you're excited to catch Super Duper Alice Cooper at Rocks Off Film Fest, you'll be pleased to note the surprisingly-not-adult-oriented production team, Banger Films, has signed on for two more documentaries: Black Sabbath and Soundgarden. Both will film this summer.

Sean Reinert and Paul Masvidal, current members of Cynic and former members of Death, have publicly come out. Their Los Angeles Times interview is worth a read, not due to their orientation, but because they're simply smart, considerate, charismatic people. Cynic's Kindly Bent Free to Us was released in February of this year.

Finally, out from left field, turbo blastbeater Nicholas Barker (Dimmu Borgir, Cradle of Filth) will join Berwick RBL and Eyemouth RBLS pipe bands -- as in bag pipes -- for a set of special engagements in Berwick upon Tweed in the UK. (Berwick upon Tweed: City name or math professor fanfic title?) Tickets will be free, but must be booked in advance. Americans, worry not, the performance will be filmed so you can battle that guy in the neighboring apartment who WON'T STOP BLASTING DUBSTEP. C'MON.

Now that you're, ahem, fully briefed, let's recap all of the A/V transmissions:

Pittsburgh grindy punks Complete Failure are offering "Errant Social Mile Marker" for name your own price at their Bandcamp. The entire album, The Art Gospel of Aggravated Assault, is available for streaming below.

If you're in the same core mindset, Maryland Deathfest-invitees and satanic City of Angels powerviolence unit ACxDC dropped "Filicide" from their Antichrist Demoncore available through Melotov Records, June 24. Stream it below, too.

Death metal more your thing? The tech-ish beasts in Hour of Penance are streaming their long-player, Regicide, in full at Soundcloud. Get ready for blasts aplenty. The album will be out on Prosthetic Records next week.

Less tech? You can find a nasty bug Under the Church. (Again, the groans.) "Denial of Death" is up on Youtube, a foul bit of rot from former Nirvana 2002 members. June 16 is the date for this infected slice thanks to Pulverized Records.

Want weird? How about a band that named their last record We Meditate Under The Pussy In The Sky? That's from Opium Warlords, featuring the talents of ex-Reverend Bizarre singer Sami Albert Hymnien. The group teased "The Self-Made Man" (streamable below) from Taste My Sword Of Understanding out on Svart Records, May 30. Tastes like doom! With. . .a weird kick. . .water. . .need water.

The first track from the One and All, Together, for Home comp collected by Drudkh is now up, with this cut coming courtesy of Winterfylleth. The folk-metal/atmophosmeric black metal round-up will be available through Season of Mist on May 27. (Preorder.) All contributions will be exclusive to the comp, with most bands offering covers of traditional standards. Scope the packed tracklisting and the track stream below.

Lastly, Vancouver sludge riff stackers Bison have checked in with the b-side to 1000 Needles, their new EP which will see a release by way of War on Music Records sometime in June. That's below as well.

TOMORROW (5/10): Saturday is absolutely overflowing. First, get into some longform tech and stretched out sludge with Ulcerate, Inter Arma, and CAR BOMB at Saint Vitus. (Tickets.) Punks, though, will have a tough choice. There's Geronimo, Force & Fire, Concrete Cross, and Nightcrawler at ABC No Rio ($8, doors at 3 PM) and then there's the throwback core of Zombie Fight (record release!), MANALIVE, On the Offense, Jukai, and Ache at The Acheron. (Tickets.)

SUNDAY, SUNDAY, SUNDAY (5/11): Need to cool down after raging? Make a classic rock connection with the retro Graveyard and Bombus at Webster Hall. (Tickets.)

Looking for late adds and dates ahead? Our NYC Metal Show Calendar has got you covered.

Let's talk IO: We were tossing you fresh gems left and right, premiering Belus, Vainaja, HUSH., Serpentine Path (click this, now), and Den Saakaldte. We also put on our thinking caps, dissecting Infestus and figuring out why bands with tiny discographies seem more authentic. And, as is our compulsion, we hoarded every release under the sun for your perusal in Upcoming Metal Releases.

As always, don't forget to dial in Invisible Oranges on East Village Radio. This week, we had Kirk Windstein from Crowbar in as a guest and he played two new dandies from Crowbar's forthcoming Symmetry in Black. Plus, we jammed mountains of metal madness. Always worth the listen. Tune in every Tuesday, 10pm EST.