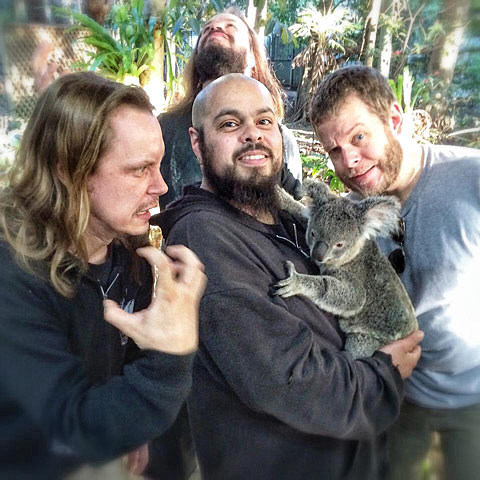 Fun fact: Do you know what happened 20 years ago today (5/16)? It was a Monday! Who says things aren't better in the future? (What, were you expecting a retrospective?) Anyway, we've got a ton to cover, so let's take a walk on the newswire:

Southwest Terror Fest's 2014 lineup has been announced, providing slow n' low lovers a roster straight out of a nocturnal emission. Held in Tucson, AZ from October 16 - 19, the fest has wrangled Neurosis, Sunn 0))), Pelican, The Body, and a whole heck of a lot more. Hearing aid manufactures are psyched. Also, probably best to bring a change of underwear. Check out the full lineup below.

How about two bands working a little quicker: Witch Mountain's rootsy Sabbath by way of Grace Slick thick doom? Done. Mobiles Of Angels will be out on Svart Records in September. Progressive death metallers Fallujah? Done. The Flesh Prevails is in the can though there's no date yet. You can catch them at The Summer Slaughter Tour.

Fredrik Thordendal of Meshuggah has crafted a set of cuts for the video game Wolfenstein: The New Order. Available on May 20, the title promises a new outlet for Meshuggah supporters to tell you that you're playing it wrong.

Core hellions Coliseum have motˆred their way back to Deathwish Inc. and will reissue their eponymous debut from 2005 along with a collection of bonus tunes. A remixed/remastered sample is available below.

In other transaction news, sludge-flingers Usnea have been inked to Relapse with the two eying the end of 2014 for a new release.

If you don't have enough Thou in your existence or were keen to work on a back injury, Dead Tank Records have pressed a three LP whopper of pre-2010 material culled from the band's many splits. Preorders have started. Your mailman quit. The collection is also available for free download for those cloudwalkers among us. 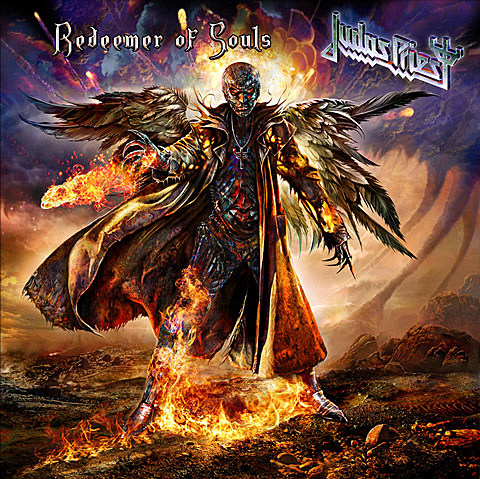 WE ARE NEARING PRIME JUDAS PRIEST TIME! 30 seconds of "March of the Damned" hit the web, another cut from Redeemer of Souls. July 15 can't come soon enough. Preorder yours and that is its cover art above. Obviously. Stream the clip below.

Riff eviscerators Forest of Tygers, who we premiered on IO recently, are tour bound, setting up an American run for the end of May and beginning of June. Show specifics haven't been announced, but the tour poster is available for your perusal below.

Crusties Extinction of Mankind are set to roll on the road as well. The UK punk blasters will be hitting Maryland Deathfest, of course, but now the rest of the country has a chance to catch them. The outfit checks into The Acheron on May 29 with Aspects of War, Trenchgrinder, and The Brood. (Tickets.)

Entombed A.D., the version of Entombed operated by LG Petrov, are finally ready to issue Back to the Front after settling with the A.D.-less over the name dispute. Best guess for what the 'A.D.' signifies? 'After decision'? 'Awww, damnit'? 'Alexandre Dumas'? That's it. Total Three Musketeers fans. Code cracked.

Finally, if you're in the market for some new reading material, the always on-point Bazillion Points is reissuing Slayer Mag X, one of the on-the-scene zines that covered the rise of the second wave of black metal. The hardcover collects interviews and tales from Emperor, Mayhem, Bathory, and more. According to creator Jon Kristiansen, nary a word has been cleansed: ìThis is how Slayer Mag X was done, nothing has been changed and all errors are intact.î Buy it for your copy-editor friend and watch them slowly go insane. Preorders come with a shirt. 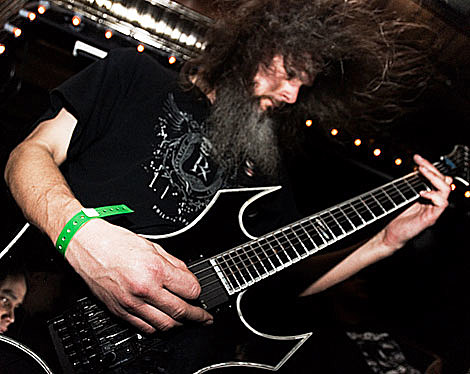 Now that you're, ahem, fully briefed, let's recap all of the A/V transmissions. Many ones and zeros were transferred and crunched and streamed this week. So much so, we've got to round this up machine-gun style. Apologies in advance to your clicking digit. All streams mentioned can be found below.

Biggies:
- Death metal machine Misery Index dropped The Killing Gods in its entirety. You can grab the album from Season of Mist on May 23. (Preorder.)

- The second taste of Blissfucker, Trap Them's June 10 scheduled assault-by-buzzing is up. Titled "Organic Infernal," the cut makes good on that threat of a title. Prosthetic Records has the preoder.

- Corrosion of Conformity may be rocking their O.G. lineup, but the new stuff sounds fresh. "The Nectar" thrashes things up once again. IX is coming by way of Candlelight Records, June 24. (Preorder.)

- Dirge directors Wolvhammer have allowed the net to Crawl into Black Sun. "Death Division" is a lumbering monster. Profound Lore has got the hook-ups on July 8.

- The occult flute tooters Blood Ceremony are back dooming again with a single. "Let it Come Down" is the A of the Rise Above Records released limited slice. Mark the calendar for June 23.

- Vuyvr has 12 inches of wax on the way. Their EP, Incinerated Gods, comes courtesy of Throatruiner Records on June 26. The Swiss sore-throat-inciters have links to Impure Wilhelmina and Rorcal.

- Mayhem is certainly sharing the wealth, issuing their fourth nibble of Esoteric Warfare. By the time Season of Mist gets this one to the streets on May 27, there will probably be a few streams of shower singing and traffic humming make the rounds.

- Origin has made their Manifest Desolate known, sending out "Omnipresent" as a blasting memo. New roarer Jason Keyser (Skinless) sounds like he's in fine form. The album will hit North American shores on July 8 thanks to Agonia Records. (Preorder.)

- Been wondering what ex-Cryptopsy screecher Lord Worm has been doing? Well, looks like black clouds got him to wiggle out from under the earth. Rage Nucleaire get ultra bleak, inspiring the misanthropic to make their version of a smile. (Blank stare?) Black Storm of Violence will be on Season of Mist and is penciled in for a July 22 drop. (Preorder.)

- Lastly, Den Saakaldte, the Norwegian sorta-supergroup, is streaming one more from Kapittel II: Faen i Helvete. If you remember, we gave "Djevelens Verk" a lot of shine on IO. The just-released is named "Du Selvproklamerte Misjonaer" and if you weren't psyched (in all senses) for the June 10 Agonia Records push, you might be now. (Preorder.)

Now, time to sprint through the rest of the underground.

Little Guys and Eye Candy:
- It was a good week for artists showcasing some visual flare, especially on the death metal side. Nader Sadek and Vallenfyre both screened treats for those looking for videos featuring more than a band in an airplane hanger. The tradsters in Magister Templi also decided to do up a promo in the style of a silent movie, thus possibly making one of the loudest silent movies ever?

- Gravecrusher, the Hungarian OSDM beast, is streaming Morbid Black Oath in full. The spooky Sectu also fall within the same vein and has a CV sporting a Therion connection.

- Dagger, in the ye olde hard rock mold, now have a single. "Ahead of You All" includes contributions from members of Dismember and Grave, if you can believe it.

- And, to wrap things up, Inanimate Existence is just bat guano incarnate. Give "Omen" a click and prepare for a Scanners ka-boom.

TODAY (FRIDAY 5/16): Whoa. Today is one of those, "Oh yeah, this is why I live here," kind of days. First up, Hardcore Activity in Progress, the Red Bull Academy Festival at the Knockdown Center. I spy some primo metal in the shape of Napalm Death and Gnaw, along with plenty other noise-niks (Bastard Noise, Skullflower) that can cross over. (Tickets.) Then, Solstafir -- the downer doom Icelandic band whose country is kinda killing it right now -- will hit Saint Vitus with Junius and So Hideous. (Tickets.) Lastly, set up a punk knuckle puck with Two Man Advantage, La Armada, THE WILL, Cojoba, and Kantuta at The Acheron. (Tickets.)

SATURDAY (5/17): Black N' Blue Bowl begins this day, my friend. If you're unable to make that core blowout, other shows abound. The Keith Morris punk supercrew OFF!, Cerebral Ballsy, and NASA Space Universe are playing The Bowery Ballroom. (Tickets.) More punk? Sure, how about EU's Arse, Ajax, Sunshine Ward, and Creeping Dose at The Acheron? (Tickets.) If the theatrical is calling your name, Ghost B.C. and King Dude are sure to smash the stops at The Best Buy Theater. (Tickets.) But, if you want doom, you got it at Saint Vitus who have invited in Hull and Bloody Hammers. (Tickets.)

Let's talk IO: We had reviews: Agalloch and Dwellers. We had interviews: Chris Reifert of Autopsy (who went Friar's on us) and Stuart Wellington from The Flop House. We had cool views: this Down live show review with some killer snapshots. We exposed you to new crews: the tech nutters in Torrential Downpour and soul-nourishing epic blarghing from Vinterbris. And, as is our compulsion, we hoarded every release under the sun for your clicks in Upcoming Metal Releases.

ALAS: You have one last chance to dial in Invisible Oranges on East Village Radio. If you haven't heard, the station is shutting down. It has been a blast, but all things must pass. The final show for IO kicks off Tuesday, May 20 at 10 PM. Be there! Scab and Wyatt will perform ancient Viking burial rituals.

Alright, consider the decks cleared. What did we miss? What are your plans? Let us know and catch all of the dates, reams of streams, and other noted details below.... 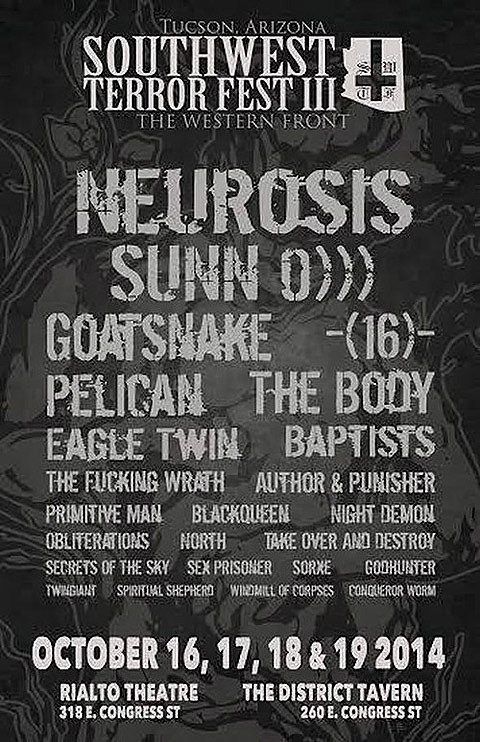 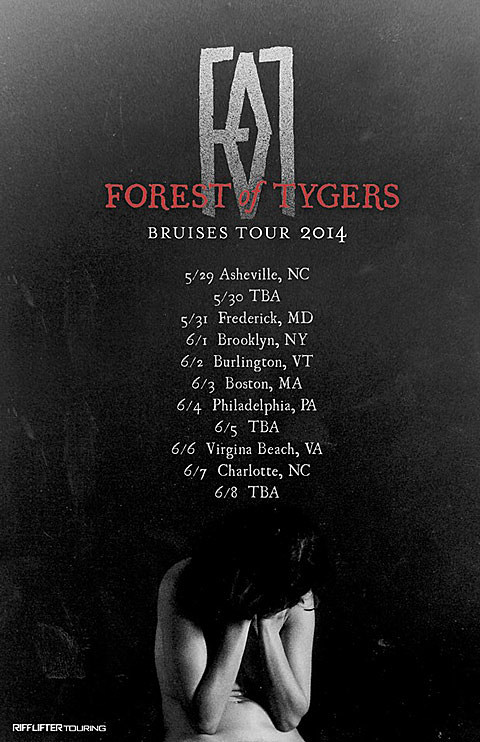