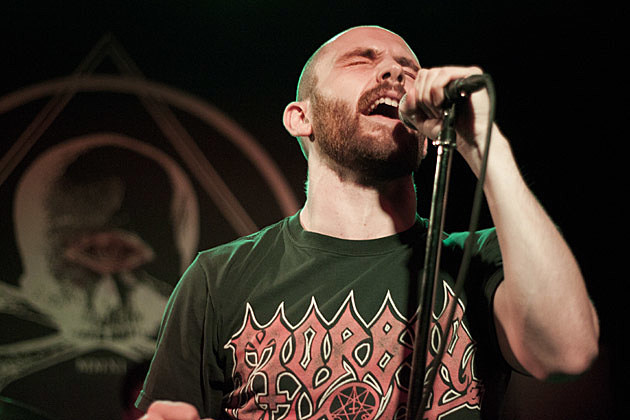 This weekend in NYC there are no shortage of heavy happenings: tonight (1/24) at Saint Vitus will be power electronic-fueled, with noise pro Prurient headlining a bill with Azar Swan and husband and wife duo Clay Rendering. (Prurient's not-so-noisy Washed Against the Rocks came out this week, and you can stream a track on Pitchfork.) Things will be a bit more traditional at the Invisible Oranges co-presented Aevangelist, Artificial Brain, Oak and Disparish show at Saint Vitus on Saturday (1/25). That will be a good one -- Artificial Brain just released a single from a forthcoming LP, and it will be the first show for Disparish, which features Andrew Hock of Castevet. On Sunday (1/26) at Grand Victory, get tech-death weird with Pyrrhon and Couch Slut (great name). That should cover your weekend.

Beyond this weekend, there's a bunch to look forward to, too. Floor are playing a FREE show at Saint Vitus Bar on 1/29 courtesy of Converse Rubber Tracks--that'll be before Floor releases a new album, Obliation, in April. Listen to a new song from a Decibel Flexi. Black/death specialists Immortal Bird also announced a tour that hits NYC on 3/5 with Mortals, as did The Dillinger Escape Plan, who are bringing Trash Talk, Retox and Norwegian weirdos Shining with them -- check out the tour dates, which includes a stop at Webster Hall on April 3 (tickets). Also on April 3 is the NYC stop on Kataklysm and Aborted's tour which happens at Saint Vitus (tickets). All dates of that tour are listed below.

And, since we missed it in last week's Heavy Lowdown, make sure to get your tickets to the third annual Martyrdoom Fest that's going down June 27 through July 1 at Saint Vitus with a stupidly stacked lineup that includes Mournful Congregation, Cult of Fire, Sargeist, Behexen, Forteresse, Lycus and many more.  For more heavy show options, check out our NYC Metal Show Calendar. It rules.

The Invisible Oranges show on East Village Radio was cancelled this week due to the second round of the Polar Vortex (not very black metal we know), but we'll be back next week giving away tickets and delivering hot doses of metal. Some of those tickets we'll be giving away will be to the ongoing Amon Amarth, Enslaved and Skeletonwitch tour which is our radio show sponsor. That tour hits Irving Plaza in NYC on 2/4.

Lastly, the metal world lost a luminary this week. Oliver Withöft, co-owner of the influential German metal label Century Media, passed away at the age of 49.

Those Kataklysm and Aborted dates are listed below. What did we miss?