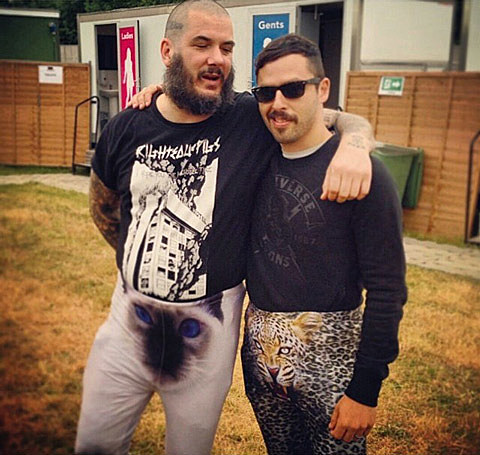 "Me and my uncle @philiphanselmo have a gang," Dillinger Escape Plan's Ben Weinman said on Twitter. "And these pants are our uniform." And now that's burned in your retinas, let's take a walk on the newswire:

At the Gates have hinted subtly and not so subtly about a new album for 2014. Now we have something of a timeline. At War With Reality will land around October/November through Century Media Records. One word, guys: GO! Check out a rehearsal update from singer Tomas Lindberg below. In other recording news, Norwegian grindsters Beaten to Death will be hitting the studio, too. Says bassist Mika Martinussen, ""Third time's a charm; Beaten To Death will record the follow-up to Dødsfest! in July, because - let's face it - we're not getting any younger, and ground-breaking records in the grindcore genre don't record and release themselves!" No? Thanks for crushing my dreams of a sentient grindcore bot. Check out some Beaten to Death GoPro-shot live footage below. 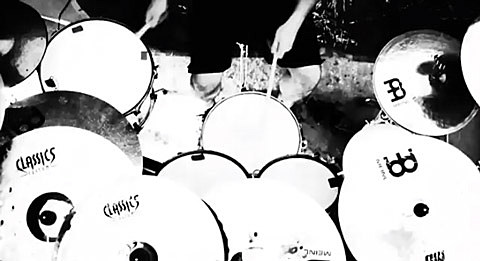 Misery Index shot a video for "The Calling" from their recently released album The Killing Gods. It's black and white, and pulls footage from a silent, bible-themed flick, thus giving it an early '90s death metal air. Appropriate, as Jason Netherton's book on the scene is out now. And the speedy Evil Invaders -- good metal sign: band named after a Razor song -- were captured live by a pro crew while covering Exciter. Find both videos below.

Quite a few artists decided to show off their albums in full this week. Mastodon put up a copy of Once More 'Round the Sun on iTunes (June 24, Reprise - preorder). The chamber folk outfit Musk Ox, fresh off their Agalloch collaboration, are now streaming Woodfall. And DRCALSONALBION, the guise of Earth's Dylan Carlson, is streaming all of Gold, his original soundtrack for the film of the same name. Woodfall and Gold were released this week and you can stream both below.

Mortals killer crusty metal keeps coming. "The Summoning" is the latest track pulled from Cursed to See the Future (July 8, Relapse - preorder). On July 18, they'll swing into the Acheron for a record release show. Illustrations are showing off "Iron Rain" from their digital EP that will see a release this summer. The thrashin' Algebra -- the one you haven't forgotten -- put up a video for "Survival Nowadays" from Feed the Ego (September 7, Unspeakable Axe). The twisted tech metallers Diskord debuted "Lethargic Regression" from the mini-LP Oscillations (August, Australopithecus Records - preorder). And the first post-Cathedral band has formed. Guitarist Gaz Jenning's Death Penalty, are releasing a single via Rise Above Records. The title track, "Sign of Times" is available below along with the aforementioned streams and all of the tour dates.

SATURDAY (6/21): Filthy doomers Serpentine Path headline an Invisible Oranges/Signature Riff presented show with Churchburn, Throaat, and Dridge at Archeron (tickets). If you wanna go old school with the metal of death, Dr. Shrinker, Desolate, False Prophet, Kurnugia, and Sin Eater are at Saint Vitus (tickets). Then, there's the bill so nice they had it twice. . . and added a few more: Breakdown, Altered Boys, Heavy Chains, White Widows Pact, Born Annoying, and No One Rules hit Asbury Lanes (tickets). More punk? Sure: Oblivionation, Raw Nerves, Demon Brother, and Concrete Cross play Death By Audio. Tickets are $7 at the door. And finally, tech kings Meshuggah and Between the Buried and Me will play the Best Buy Theater, which is sold out.

SUNDAY (6/22): You can check out Black Flag, HOR, and Cinema Cinema at Europa (tickets). Hey, you don't have to tell people what year you saw Black Flag, just that you saw them.

Let's talk IO: It wasn't as packed as most weeks, but the new releases were varied and Upcoming Metal Releases gave you the lowdown on which ones to buy. We streamed the full album for Diseased Reason and had a giveaway that's still ongoing. Listen, bang your head, and then comment to win. We interviewed Mike IX Williams of Eyehategod and Attila Csihar of Mayhem. And we checked out the Austerity Program, Incantation, and Trap Them in our round of reviews.