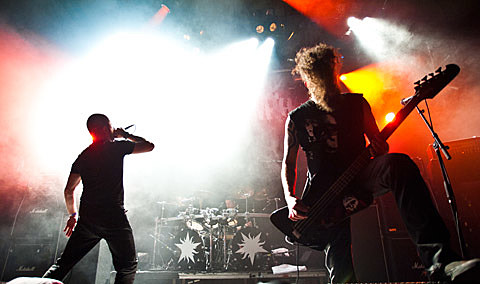 If you're not busy loading your pig's blood supersoaker, let's take a walk on the newswire:

I wish I could vomit contracts on you people: Ruthless black metallers Anaal Nathrakh are now on Metal Blade and will have a new album out later this year. In other signing news, Relapse is the home of Gruesome, the Matt Harvey-led death metal supergroup. Actually, that should be Death, with a capital D. Says Harvey, "Their support in our mission to keep the early Death sound alive means a lot, especially since they're the home of the Death catalog." This signing is not a test of power, this is not a game. Lastly, Old Wounds, the ultra-pissed hardcore monster, are now on Good Fight. The new EP, Death Projection, will be out on September 16.

Those labels giveth, "fans" are taking things away. Eyehategod were robbed in St. Louis. "Hey folks - wanted to put this out there in case anybody can help that last Wednesday June 18th in St. Louis, MO our van was broken into while we were on stage." Ugh. As far as financials go, it has been a rough tour for the reformed legends, shame since Mike IX Williams loves being on the road. Any leads, post to their Facebook. In addition to the EHG pilfering, someone made off with Shadows Fall's merch twice: "...so anyways our man Mikey leaped off stage and half the crowd gave chase too but unfortunately him and his buddy got away in a red Toyota/honda compact car with the license plate CFP4362 NC."

So, let that be a lesson: Treat these upcoming tourers better. Tech death speed freaks Origin will be hitting the road with King Parrot, Beyond Creation, Abolishment of Flesh, and Your Chance To Die in August. No venues announced yet, so check back for more. And occult doomers Castle are heading back out in support of Under Siege. On July 15, the band will swing into Saint Vitus. Tickets and support slots will be announced soon. All of the dates are listed below.

Accept have a new video up for "Blind Rage" from Stampede (August 15, Nuclear Blast - Preorder). The band will be playing a few live dates with Raven in the US later this year. Voodoo Gods -- featuring Cannibal Corpse's George Fischer, Nuclear Rabbit's Jean Baudin, and Jean Baudin's stupid big bass (so many trees died for that thing) -- shot a flick for "Renaissance Of Retribution." Anticipation For Blood Leveled In Darkness will on shelves July 28. Finally, Kurt Ballou was tasked with creating a video for Stompbox Sonic, so he wrote and recorded an entire song. Because Kurt Ballou is a workhorse put on this planet to make you feel like crap about your own productivity. Sigh. All of the videos appear below.

A few full streams hit the web this week to coincide with their physical release. Powerviolence nutters ACxDC are streaming Antichrist Demoncore in full. The noisy Beige Eagle Boys put up the entirety of You're Gonna Get Yours. The super-heavy Rorcal are showcasing their Live in Geneva featuring a guest spot from droner KK Null. But Nunslaughter wins if we're basing this thing on pure volume. Angelic Dread's 31 tracks are now available on Hells Headbanger's Bandcamp. All streams appear below. 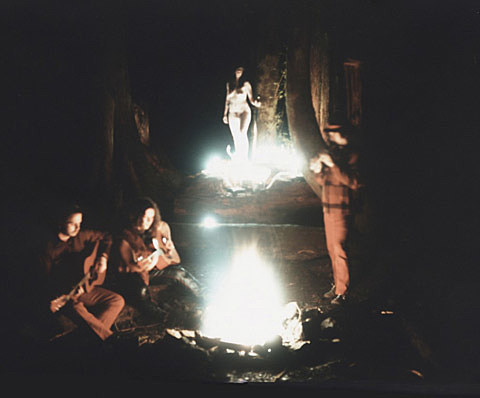 For the single tracks, Wolves in the Throne Room opened third-eyes with their celestial experiment "Initiation At Neudeg Alm" from Celestite (July 8, Artemisia Records). They'll be embarking on a short West Coast tour soon, dates are listed below. Long-running thrashers Overkill have debuted "Armorist" from White Devil Armory (July 22, eOne Music). Overkill will be touring with Prong soon. The Icelandic cowboys Solstafir have dropped "Lágnætti" from Ótta (September 2, Season of Mist - Preorder). And stoner rock riff bank Karma to Burn are now streaming "57" from Arch Stanton (August 8, Deepdive Records and FABA Records). Karma to Burn will be touring Great Britain this summer. All of the dates are listed, along with the streams, below.

FRIDAY (6/27): True to the fests name, Marytrdoom at Saint Vitus gets rolling with DOOM: Australia's Mournful Congregation, Imprecation, Begrime Exemious, Holocaustum, and Geryon (tickets). Elsewhere, powerviolence icons Infest, Magrudergrind, Hounds of Hate, and Chain Rank invade the Acheron, but that one is sold out; Jello Biafra and the Guantanamo School of Medicine plays with Negative Approach and All Torn Up at Highline Ballroom (tickets).

SATURDAY (6/28): More Martyrdoom at Saint Vitus with some nasty tremolo dealers: Sargeist, One Tail One Head, Typhus, Forteresse, and Sacrament Ov Impurity; If you want some tech and widdle, Malignancy, Goemagot, and Sexcrement are at the Acheron (tickets);  and Dust Angel, Demencia Alkoholika, Justin Symbol, and the winningly named Vomit Fist are at ABC No Rio. Tickets are $8 at the door, doors are at 2 PM. Wish: a Vomit Fist/Sexcrement tour package, please.

SUNDAY (6/29): Martyrdoom continues at Saint Vitus with a black metal bill to blargh for: Behexen, Hell Militia, Prosanctus Inferi, and Hekseri. That one is sold out. So, the Acheron has your punk parachute with Angel Du$t, Criminal Instinct, Hard Stripes, and Brain Slug (tickets).

Let's talk IO: The new releases were STACKED and we tracked them all with Upcoming Metal Releases. We had our share of killer premieres with Cardinals Folly, Fórn, and Sivyj Yar. We talked with the divisive Drew Daniel of the Soft Pink Truth and he played us his intro/outro mix. Scab Casserole went to go see Shadows Fall and HIS REACTION MAY SURPRISE YOU (sorry, always wanted to write that). Plus, Scab collected the weirdest and most nonsensical of metal's poets. Then, Joseph Schafer showed off everything he learned from Chris Black and his band High Spirits. Finally, SLAAAAAAAAAAAAAAAAAYER. We did a presale for their upcoming tour with Exodus and Suicidal Tendencies.