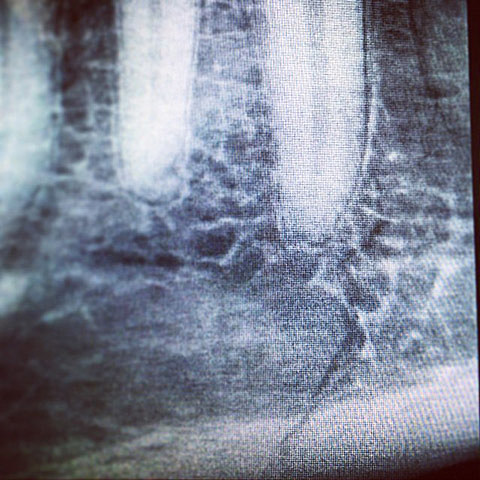 The picture above is Riley Breckenridge's fractured jaw after the Puig Destroyer -- the baseball themed grindcore group -- drummer took a pitch to the head. After posting to his Instagram, Riley said, "Don't try to hit fastballs with your face, kids. #themoreyouknow #luckybreaks." Noted. That must've been terrifying, but not as terrified as Puig Destroyer's namesake is of thunder.

Speaking of breaks, classic thrashers Rigor Mortis have one more record in them before they call it a day. The final collection will be called Slave to the Grave, out on October 7 via the band's own Rigor Mortis Records. The album was recently crowdsourced into existence. You can check out the details below. In other album news, sludgesters Weedeater are repressing Sixteen Tons through Season of Mist on CD and LP (preorder). The record has been out of print for a bit and you can stream it in full below.

Returning to the athletic theme, if you're in Brooklyn, you can start cycling to Slayer. SYNCstudio will be holding a "metal themed indoor cycling class" on July 24. "This next song is called. . . "BLACKNESS WITH SCHWINNNNNNNNNNNNNNNNN." 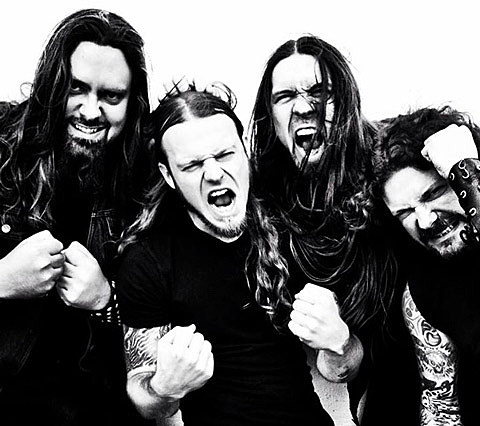 If this week was good for something, it was a wealth of new music videos. The form is alive and well with contributions from UltraMantis Black, Corrosion of Conformity, Goatwhore, and Enabler. All four bands have live engagements in their future. UltraMantis Black will be playing This is Hardcore. CoC are going to be in Australia (the continent and the country) and then will head back to the left side of the US for a slate of dates with Bl'ast!, Brant Bjork & The Low Desert Punk Band, and Lord Dying. Goatwhore are currently out with the Summer Slaughter mega bill. And Enabler are set to hit Chicago on August 5 with Power Trip and Mammoth Grinder. All of the updated dates along with the videos appear below.

For the full-album previews: Blackened rippers Mutilation Rites have offered up all of Harbinger (preorder). The Brooklyn bashers are at Gilead Media Fest this weekend. Then, Swedish d-beat superheroes Martyrdöd unleashed Elddop (preorder). Both albums hit the streets on July 22, and you can hear the goods below.

For single tracks and teasers: Midnight covered Venom's "Too Loud (for the Crowd)" for Decibel's Flexi Series. As a reminder, Midnight (who play with Samhain in November) will be appearing at a stacked New York Deathfest. Entombed A.D. -- the LG Petrov iteration of the Swede death n' rollers -- put out "Vulture And The Traitor" from Back To The Front (August 5, Century Media - preorder). Sounds like Entombed, but so do a lot of bands. The slow and low Monarch unveiled "Mortes" from Sabbracadaver (July 22, Profound Lore - preorder). Make sure you set aside the full 18 minutes for that one. And finally, doomers Cardinal Wyrm debuted "Dreams of Teeth" from Black Hole Gods (August 5, self-released). All streams appear below.

TODAY (FRIDAY, 7/18): Free show alert: Ceremony, Iron Lung, and Nothing will play Brooklyn Bazaar. The doors are at 7 PM and you can RSVP to skip the line. Want something more metallic? Mortals, Godmaker, and Mammal are playing the Acheron (tickets). That's Mortals record release show, so go and congratulate them.

Let's talk IO: It might've been your vacation, but, as always, we were working to find the best metal. Upcoming Metal Releases tracked all of the new things. We premiered a new ass-kicker from the nasty Rabbits. We went review-crazy with critiques of Bastard Feast, Martyrdöd, and Peculate. We remembered At the Gates before they blew up. We unearthed some seriously solid black metal. We also gave some shine to albums we missed. And we took a long look at the announced bands for 2015's Maryland Deathfest.