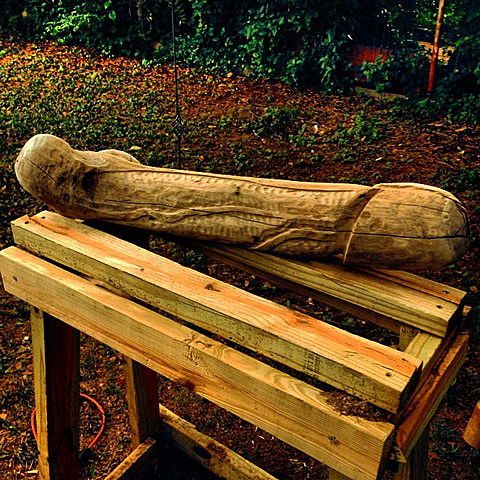 Mastodon's Brent Hinds carved a giant penis out of wood. That part is fine, it's the fact every metal news site lead with the. . . hard hitting story this week. So remember, whenever you get sick of the omnipresent coverage of an over-hyped band: one giant wooden wiener will always trump them all. Metal!

More dick news: Belgium's Brutal Fest was canceled due to bands battling with the promoter. The concert was set to bring together Vader, Aeon, Aborted, and others, but it was KO'd, in the words or both Aeon and Aborted, "Due to the unprofessional and fraudulent acts of the promoter. . . " Brutal Fest's Facebook followed up with, "I can't continue any longer with this event due medical reasons and that's probably the main reason for the cancellation." Probably the main reason? Is the medical reason Mementosis?

Elsewhere: Can't make a Meshuggah show? Worry not, it's coming to the comfort of your own home. The tech-y Swedes are putting out another concert CD/DVD package called The Ophidian Trek out on September 30 and this one is pretty expansive. You can check out the details below. And, because the internet, Meshuggah also received the "Space Jam" mash-up treatment courtesy of Analog Staple. Seems there is an entire subreddit dedicated to pairing songs with the Quad City DJ's, uh, classic.

A few artists/bands have new irons in the fire: Post-metallers Minsk are set to hit the studio soon. They're eying 2015 for their next album. PHILM, one of the current projects of Dave Lombardo, will release their sophomore album Fire From The Evening Sun on UDR Music on September 16. Num Skull, the cult-adored '80s thrasher, are getting Ritually Abused back out on Relapse Records on September 16 (preorder). You can check out a remastered track below. And Dee Snider is putting on Titus Andronicus with puppets. What do you wanna do with your life? I wanna put on Shakespeare plays with puppets! Look what you did, now your mother can't stop crying. Check out Snider's segment on Fox News' 411 below.

Concert madness: Leprous, the Norwegian progsters famous for backing Ihsahn, will be playing nerd-metal-haven ProgPower on September 12 in Atlanta, Georgia. Then, they'll stay in the states for a bit. They'll check into NYC's Webster Hall on September 20 with the Binary Code (tickets). Their full list of dates appears below. Pyrrhon have a tour coming up and they'll also be playing a show at NYC's Saint Vitus on August 18 with Revocation, Artificial Brain, and Psalm Zero. Tickets are available now. And in the rarely used "Metallica does cool thing" bucket, there's a neat documentary available on YouTube detailing Metallica playing a Netherlands date in 1984. You can watch it below.

For the full-album previews: Appalachian black metallers Panopticon are streaming Roads to North at NPR. That record is also out today. Thrashers Algebra crunched the numbers on Feed the Ego and have released the solution. Their album is out on September 2 through the perfectly named Unspeakable Axe (preorder). The seriously pissed Columns have put up all of Please Explode (August 5, Relapse Records - preorder). Lastly, tradsters Saturn are showing off all of Ascending (Live In Space) (August 5, Rise Above Records - preorder). Check out Algebra, Columns, and Saturn streams below.

Finally, to close things down, Electric Wizard now have a video for "I Am Nothing." Surprise: DRUGS! Time To Die is out on September 30 via Spinefarm Records (preorder). Activate that sixth circuit below.

SUNNNNNNNDAY (8/3): One of the premier tickets of the summer hits the Bowery Ballroom. Boris, the Atlas Moth, and SubRosa will deafen all comers (tickets). The next day, Boris play a drone set at Saint Vitus.

Let's talk IO: We were juggling tons of features this week. As we always do, we tracked the week's new stuff in Upcoming Metal Releases. We went all music television with two video premieres: Music Blues and Below. Ah, now I'm sad. We premiered two albums: the Dogma/Corrupt Leaders split and a Sarcofago repress. We hit the reviews hard with Coral Cross and Fallujah. Dave Hall put his Canadian citizenship in doubt with a rant against the Polaris Prize. And we interviewed Aðalbjörn Tryggvason of Sólstafir.

Alright, consider the decks cleared. What did we miss? What are your plans? Let us know and catch all of the dates, reams of streams, and other noted details below... 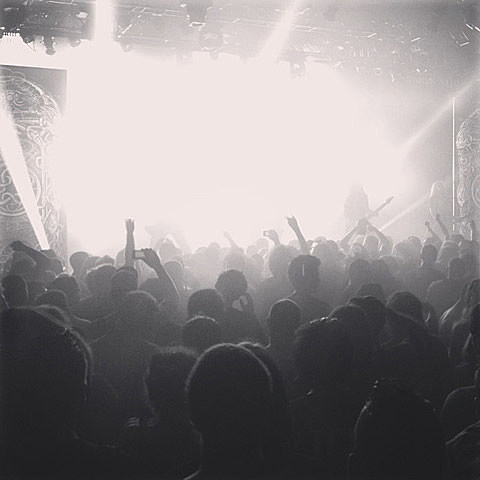