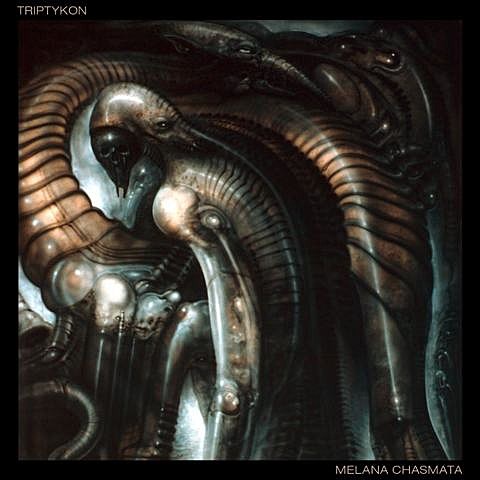 Triptykon, Tom G. Warrior's post-Celtic Frost concern, have announced the details for their second full-length album. It'll be entitled Melana Chasmata, it'll run for about 70 minuts, and it will come out in the States on April 15 -- just in time for everyone to spin it for a month before the band's Maryland Deathfest appearance. Check out the track listing below. That's Alien creature creator and longtime Celtic Frost/Triptykon collaborator H.R. Giger's cover art above. Unsurprisingly, it looks like it's made of dicks.

Prog-metal pioneers Cynic are streaming their new album, Kindly Bent to Free Us, via Pitchfork. It picks up big time in its second half, if you ask me.

New-school black metallers Vattnet Viskar will be touring with Vaporizer in March on their way to SXSW. They'll hit NYC on 3/3 at the Acheron; locals Pyrrhon (my band) will be on the bill as well. All tour dates are listed below.

Powerviolence legends Despise You have added a second NYC show on the day before their previously-announced April 5 appearance. The April 4 edition will take place at The Silent Barn; it'll also feature the new NYC-based iteration of Magrudergrind, as well as Backslider and Grudges.

It's kind of a slow weekend for shows, but there are three sweet events on Sunday (2/9): Pissed Jeans / Purling Hiss / Pampers at the Knitting Factory (tix), Psalm Zero / Yautja / Geryon / Kevin Hufnagel at the Acheron (tix), and Deep Swell / Kings Destroy / The Brought Low at Saint Vitus (tix). Keep an eye on our awesome NYC metal calendar for the latest. It rules.

From the IO department: we debuted music by Dephosphorus and Soreption, and took a careful look at new jams by Impure Wilhelmina, Drudkh, & Winterfylleth. We also spoke to Steve Tucker of Warfather and two members of the underrated and sadly defunct Babylon Whores. We also gave you the week in notable metal releases, and the gave away some tickets to see Amon Amarth, Enslaved, and Skeletonwitch (courtesy of Ticketmaster) via our East Village Radio show. Tune in every Tuesday at 10pm for more giveaways, guests, and brand new metal jams.

Check out the Triptykon track listing and the Vattnet Viskar/Vaporizer tour dates below. Anything else?