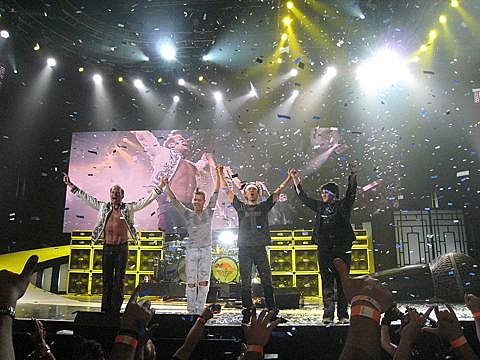 Real talk: the weather fucking sucked this week, and it shows few signs of improving over the weekend. On top of that, it's Valentine's Day today. Not brutal! (Or doubly brutal, depending on your inclinations.) But you guys are troopers, right? And there's a good amount of fun stuff going on this weekend:

Tonight (2/14): industrial pioneers Skinny Puppy are playing at Webster Hall along with Army of the Universe & Cult of Youth, though the show is sold out. Saint Vitus is hosting a more romantic event (by some definitions, anyway) -- the DLR-era Van Halen tribute band Bottom's Up.

The great Polish death metal band Decapitated have entered the studio to record their sixth album.

Some grainy, 30-second streaming samples of the new Triptykon album are available on Amazon, if you're into that kind of thing.

Knelt Rote have canceled their appearance at Martyrdoom 2014, which is a bummer. On the bright side, Lord Mantis and Evoken have joined the bill.

Shirley Temple's passing reminded a lot of people that her daughter Lori Black was briefly a member of (the) Melvins, though Black's stint in also-ran thrashers Clown Alley continues to go uncelebrated.

Speaking of Melvins, frontman Buzz Osborne has debuted the first song from his aforementioned solo acoustic 10" via Rolling Stone. You can stream it below.

The Dillinger Escape Plan have announced another spring tour. This one's with Tera Melos & Vattnet Viskar (the latter of whom are playing NYC soon), and while it doesn't stop in NYC, you can catch it if you schlep out to Hartford, CT on May 10. All tour dates are listed below.

We checked out great new tunes by New Light Choir, Behemoth, The Wounded Kings, and Xothist. We continued our career-spanning retrospective on Babylon Whores. We gave you the deets on all of this week's $$$-worthy new metal. And we spoke to NYC metal scene fixture Curran Reynolds (Wetnurse, Body Stuff, Today is the Day, & the Precious Metal Series) on our East Village Radio show. Tune in every Tuesday night at 10pm on EVR.com for ticket giveaways, interviews, and the best new riffage around.

The Dillinger Escape Plan tour dates and Buzz Ozborne stream below. Anything else?