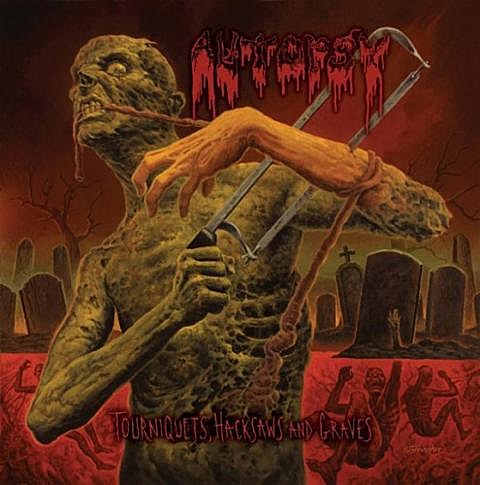 Tonight (2/21): OM & Zomes will play MHoW (tix), while Rivers of Nihill, So Hideous, Black Crown Initiate, and Torrential Downpour will hit Saint Vitus (tix). If you're out in Long Island, you can catch Deafheaven as part of the Between the Buried & Me / Intronaut tour (tix).

Tomorrow (2/22): Russian Circles, KEN mode, & Inter Arma are checking (back) into Saint Vitus for their second NYC show this week, which has been sold out for a while now. Anicon, Yellow Eyes, and Vorde are teaming up for a potent local black metal show at the Acheron (tix). Goosebumps, La Misma, Libyans, Mercenary, & Ajax are delivering the hardcore goods at 538 Johnson.

Sunday (2/23): The Sword, Big Business, & O'Brother are playing MHOW, but it's also sold out. And for even more shows, check out our NYC Metal Show calendar. It rules.

Arkansan doomslingers Pallbearer are currently recording the follow-up to their critically adored 2012 effort Sorrow and Extinction. Hopefully their fans will be able to control their emotions. Prolific black/grinders Anaal Nathrakh are in the studio as well.

We mentioned yesterday that Gridlink's excellent swansong album is streaming in full. In a novel but almost certainly doomed effort to interfere with piracy of the album, their label Handshake Inc. has launched a campaign to flood illegal download hubs with unlistenable fake versions of it. Participants will (ironically) receive a free download code for the album, along with a chance to win a vinyl copy of the album. You can also win a test pressing of the album via Decibel's karaoke contest.

Death metal kinda-legends Bloodbath announced that a) they still exist, b) they have ten new songs finished, and c) they have a new vocalist. Since their vocals slot has previously been occupied by Mike Akerfeldt of Opeth and Peter Tagtgren of Hypocrisy -- two of the best-regarded death metal vocalists ever -- the new guy has some big shoes to fill. The band has provided some oblique, birthdate-based hints as to his identity; journeyman vocalist Jörgen Sandström (Entombed, The Project Hate, etc.) is currently the metal blog world's best guess.

Motörhead are launching their own festival cruise in the vein of 70,000 Tons of Metal and such. Details are scant, but it will be called MOTÖRBOAT. The name alone should sell some tickets.

Local metallic hardcore stalwarts Tiger Flowers have released a great, First Blood-themed (that's Rambo-themed for you Philistines out there) video for "Cruisin' Til the Wheels Fall Off," the lead single from their upcoming full-length debut. You can stream it below. Frontman Jesse Madre told us an awesome story about the video shoot on our East Village Radio show last fall.

Speaking of which: this week's show was sponsored by the ongoing Children of Bodom / Tyr / Death Angel tour, which hits NYC on 3/28 and 3/29; we gave away tickets to the tour's San Francisco date during the show. Don't forget to tune in every Tuesday at 10pm EST to win more tickets to select dates of the tour.

Now, over to the Invisible Oranges corner: this week, we scoped out new music by Neige et Noirceur, Towers, Impetuous Ritual, Separatist, Hooded Menace, and the unpronounceable Kuolemanlaakso. Radio host and content editor Scab Casserole finished up his epic Babylon Whores career retrospective. And, as ever, we ran down all of the week's riffs fit to buy.

Oh, and one more thing: we debuted some awesome new songs from the upcoming Elemental Nightmares split-release series today, including new music from Vuyvr, Ashencult, Membaris, and Porta Nigra. You can stream those below too.

Whew! I think that's it. Anything missing?