This week ran a little slow as the music industry geared up for the clusterfuck that is SXSW, but it saw some notable developments anyhow. (And if you're going to Austin, here's our guide to metal at SXSW.) Here's the low-down.

First, live stuff for this weekend: Dehumanized is topping a brutal death metal bill at The Acheron tonight (3/7). Tortuous Inception, Kalopsia, Forced Asphyxiation, & Hypoxia provide support (tix). On Saturday (3/8), there are two shows with Japanese headlining acts: experimental weirdos Vampilia will put in the first of a few NYC appearances alongside Mick Barr, Kevin Hufnagel, & MV Carbon at Silent Barn, while punkers System Fucker will team up with Aspects of War, Nomad, Herpes, & Warthog for an Acheron show (tix).

Swedish punks Infernöh's aforementioned TBA appearance on April 12 has been slated for the Acheron.

Speaking of SXSW: if you're headed to Austin and you've got an ear for the heavy, check out our Metal At SXSW 2014 rundown for all of your schedule-building needs.

Over on Invisible Oranges, we took a gander at new jams by Solstice, Tiger Flowers, Metsatöll, and a host of underground black metal, including Skogen, Sujo, & Rhinocervs. We warmed up for Tankcrimes' upcoming Brainsqueeze II Festival by bringing you a compilation showcasing every band on the bill, including some exclusive tuneage from Municipal Waste, Fucked Up, & The Shrine. We spoke to Slough Feg main man Mike Scalzi about his controversal 2010 IO columns, among other things. We returned to East Village Radio -- this week's show was brought to you by the Children of Bodom Halo of Blood tour, which also features Tyr & Death Angel. Tune in every week for ticket giveaways, interviews, bad jokes, and tons of good metal jams. 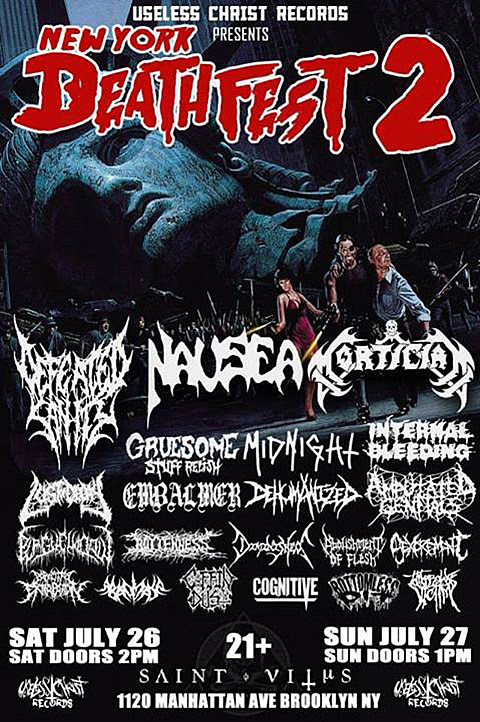