DOWNLOAD: The High Dials - My Heart is Pinned to Your Sleeve (MP3)
DOWNLOAD: The Asteroid #4 - Flowers of Ours (MP3) 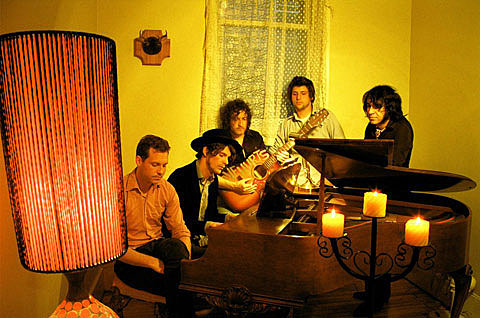 Fans of trippy psychedelic neo-shoegaze take note: Montreal's High Dials and Philadelphia's The Asteroid #4 play Cake Shop tonight (6/8), the first date of a short East Coast tour on both sides of the U.S./Canadian border. Opening the Cake Shop show are locals The Runaway Suns. who definitely fit within this paisley-accented bill.

The High Dials will be debuting a new line-up tonight that now includes former Dears basher George Donoso III on drums, and the promise of hearing the lush harmonies found on their recordings in a live setting. Says frontman Trevor Anderson, "There has never been this much singing in the band. It's very exciting to hear these harmonies happening. Over the past couple of years I've been moonlighting as a soul DJ in Montreal and rediscovered my love of old vocal groups. Very few rock bands use voices and harmonies the way they did in rock's golden era, when everyone in the band was a singer. We want to bring some of that to our show."

Anderson and the rest of the band have been putting the finishing touches on The High Dials' new album, their first since 2008's terrific Moon Country (which made my Best Of list that year). You can download a track from that above, and watch a wizard-heavy video for their song "Killer of Dragons" at the bottom of this post.

The Asteroid #4, meanwhile, have been fairly quiet since releasing These Flowers of Ours in 2008, a record that at times recalled Nowhere-era Ride, though they tend to lean more '60s overall. If you dig that comparison (and like The Brian Jonestown Massacre and Rain Parade), it's a record worth picking up. The album's title track is offered up as an MP3 at the top of this post. They're not bad live, either.

All High Dials/Asteroid #4 dates are below, plus that "Killer of Dragons" video.

The High Dials - Killer of Dragons