the Hold Steady @ the Mohawk during SXSW (Angelina M) 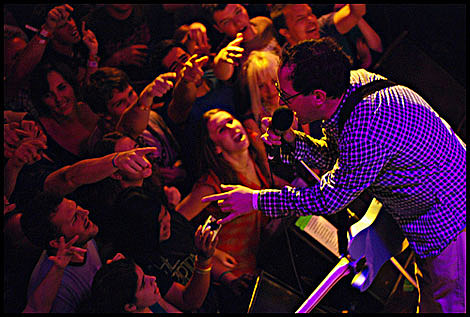 I didn't catch the Hold Steady show at Irving Plaza in NYC last night (3/30), but I was at the one pictured above which took place Friday night, March 20th, at the Mohawk in Austin for SXSW. The packed show was in a relatively small venue. And as you can kind of see a piece of in the picture, everyone was having a good time during the energized performance. One review says...

"The Hold Steady: Renowned for its prowess in concert, Craig Finn and company are still touring behind last year's superb Stay Positive. Shortly after midnight, Finn strolled onto the tiny stage at the Mohawk, waved to the fans overhead and those in front, picked up his guitar and let fly. For the next 60 minutes and change, the Hold Steady affirmed its standing as one of America's greatest living rock bands, a no-fuss yet deeply poetic group that simply speaks from the heart." [Star-Telegram]

And speaking of small venues, the band, who has already co-headlined the very big Terminal 5 (with a band who has 5 shows coming up at the much, much smaller Mercury Lounge), will return to the medium-sized Bowery Ballroom on June 8th, and then play a 2nd NYC show at the same-sized Music Hall of Williamsburg two days later. Tickets ($20) for both shows will be on Am Ex presale Wednesday at noon, and then regular sale on Friday.

And about last night...

The Hold Steady has become an unstoppable rock machine, with a catalog deep enough for the band to peel off song after powerful song in concert without getting to them all.

That about sums up the Hold Steady's performance Monday night at the Fillmore NY at Irving Plaza, on the second night of an extensive spring/summer tour. Playing to a packed house, the band drew from all four of its albums, with a particular emphasis on last year's "Stay Positive" and the group's first record, 2004's "Almost Killed Me."

Whatever the song, singer Craig Finn did his moppet dance while he sang, waving his arms around and gesticulating wildly while Tad Kubler cranked out huge, joyous guitar riffs like they were some kind of gritty rock 'n' roll astringent, good for a soul-scouring deep-cleanse.

And they were: the crowd sang along throughout, clapping out a staccato rhythm on some songs and pumping their fists on others, all to Finn's evident delight. [listen, damnit]

The band's new live/documentary CD/DVD, A Positive Rage, is out April 7th. All tour dates below...