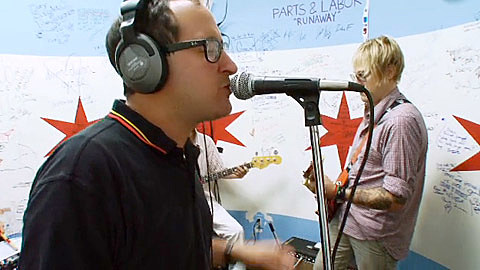 The Hold Steady inject another 1.21 jigowatts of electricity into "The Power of Love", the 80s Back to The Future soundtrack fave by Huey Lewis & The News. Check out an AV Club video of The Hold Steady's doing a boozy, Stones-influenced version below, and look for The Hold Steady on the road in late September, including at the Popped! festival in Philadelphia.

The Hold Steady just finished a run of dates with The Donkeys who will play Knitting Factory in Brooklyn TONIGHT (9/2) with The Latebirds and Brooklyn's own Dinosaur Feathers. Tickets are still available.

The show is one of a select few dates for The Latebirds, who are touring in support of the US release of their new LP Last Of The Good Ol' Days (out now). If you just take the band's clearly American-sound for granted, you might not realize that The Latebirds are actually from Finland....

Blurt -Online: Americana really informs much of the sound.

Latebird Markus Nordenstreng: My first introduction to rock music came from Bruce Springsteen when I was eleven years old and that's when I got plugged into the great amp of life, as they say. I became a big fan of American popular culture, from Jack Kerouac to John Coltrane, from Hank Williams to Bob Dylan, from Paul Auster to Patti Smith, from Peckinpah to Scorsese, from the MC5 to Snoop Dogg, from Mother Maybelle to Marlon Brando. I think there is a common thread all along.
In the past ten years I've spent lots of time in the U.S. - not only touring or recording with the Latebirds, but on my own as well. I prefer spending my winters in Southern California instead of Southern Finland for sure...

All Latebirds and Hold Steady dates, plus that video and some other goodies are below.