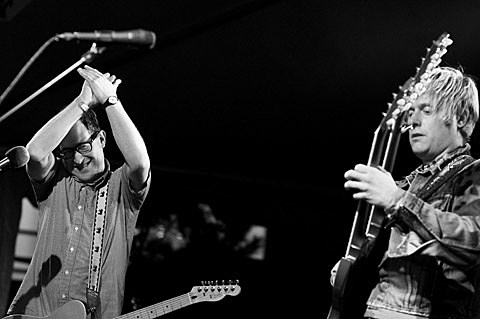 Last year, after The National recorded "The Rains of Castamere" for Season 2 of HBO's Game of Thrones, we wondered if Bon Iver might, Season 3, do "The Bear and the Maiden Fair" which is another popular song sung often in George R.R. Martin's Song of Ice & Fire novels. Turns out GoT producers have tapped The Hold Steady to record a version of that tavern favorite, that features music written by the show's composer, Ramin Djawadi.

Audio hasn't been released yet and they haven't announced when it will be used but, if I had to guess, it will be used in Season 3's penultimate episode which is being scripted by George R.R. Martin himself. The track, will, however, be released as a 7" single for Record Store Day. The third season of Game of Thrones (based on the first half of Martin's novel, A Storm of Swords, maybe the most action-packed of the books) premieres March 31 and the trailer can be watched below.