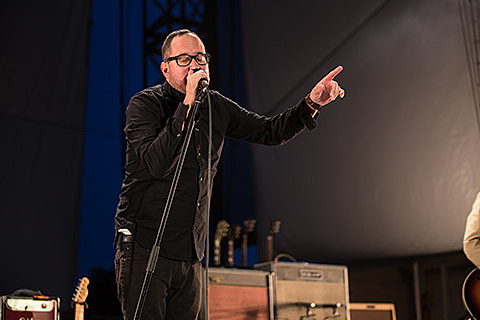 The Hold Steady frontman Craig Finn and The So So Glos are already on board for the BrooklynVegan-presented 'Champagne Jam' holiday show at Webster Hall headlined by The Front Bottoms, and now it's been announced that just ten days later the full Hold Steady crew and the So So Glos will team up yet again to play New Year's Eve at Music Hall of Williamsburg. The show also doubles as Hold Steady bassist Galen Polivka's birthday party. Here's the details:

The Hold Steady will be celebrating bass player Galen Polivka's birthday in extra special style to end 2014, by having a Birthday Bash at Music Hall of Williamsburg on December 31, 2014. Special Guests The So-So Glos will start the evening off right before The Hold Steady blast through their 111th (and last) live show of 2014. Join in for a birthday toast at midnight as Galen enjoys day two of a new year. There are a limited number of tickets for the post-show Birthday Bash to be held downstairs at Music Hall. The Birthday ticket includes a limited edition numbered and THS-signed show poster and access to the Birthday Bash, where The Hold Steady will be DJ'ing from 1am until the streets are clear from that other holiday happening on December 31.

Tickets for the show go on sale Friday (10/31) at noon with an AmEx presale starting Wednesday (10/29) at noon. For $30 extra, you can get the birthday ticket which "includes screened poster signed by the band and an invite to post-show birthday celebration downstairs where The Hold Steady will be DJ'ing."

The Hold Steady's only other announced dates are a four-night run in Toronto for The Horseshoe Tavern's 67th birthday celebration. The first two nights are with Single Mothers, a band who are definitely inspired by The Hold Steady. All dates are listed below...