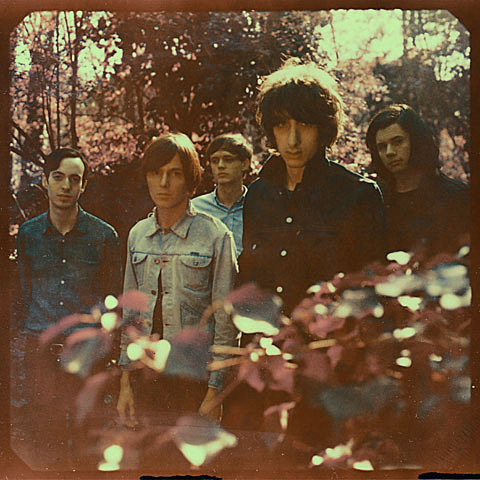 If you were, like me, trying to figure out if it was feasible on Thursday (7/28) to see both Metronomy at Pier 57 and make it to The Horrors sold-out show at Studio @ Webster Hall... you don't have to sweat it anymore. The Horrors show has been moved to August 9. All previously purchased tickets will be honored. The Horrors will be back fora proper North American tour starting in September, which hits Webster Hall (main venue) on October 4.

August 9 is also the US release date for The Horrors' keyboard-heavy third album Skying which takes them further and further away from their goth beginnings. I might even call it a summer album -- Skying is certainly an appropriate title. It received a 7.5 from Pitchfork today:

Skying continues the evolution set in motion 2009's Primary Colours, but with an emphasis on melody and pop form. This time, the band recorded and produced in their own studio, crafting a sound that recalls both the gothic pomp of 80s new wave and the big-screen dreaming of early-90s shoegaze, just as it was beginning to transform into chart-conquering Britpop. That the record can be heard as a catalogue of influences is nothing new for this outfit. They've routinely been tagged as "record collector rock" for their unabashed aping of influences from the Cramps to Can -- and indeed their well-selected covers indicate a group that has spent some time in record shops.

Some of those influence this time include Sparkle in the Rain era Simple Minds and other '80s widescreen pop (The Sound and Chameleons come to mind too), not to mention '90s baggy and Can. The latter can be heard on the eight-minute "Further Away" which you can download at the top of this post.

You can stream the whole of Skying at the bottom of this post. Also down there: the video to single "Still Life" and all 2011 North American tour dates.