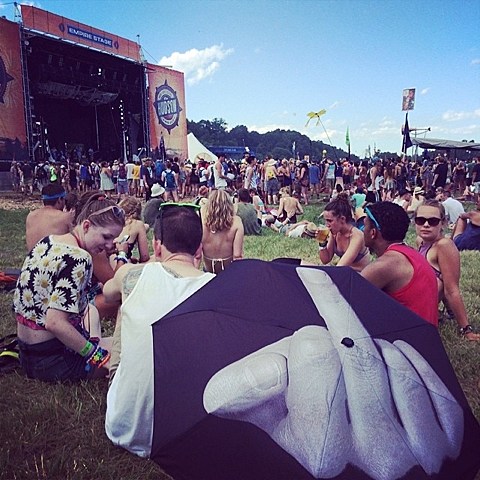 Inaugural upstate NY music festival The Hudson Project went down this weekend (Friday, July 11 - Sunday, July 13) and seemed to get off to a good start with positive reviews of Kendrick Lamar, The Flaming Lips and more, but eventually things to a little sour. Daily Freeman reported that dozens were arrested on drug charges, and though the bit of rain on Saturday didn't put too much of a damper on the festival, the weather on Sunday caused the rest of that day to be cancelled. From a press release that went out yesterday afternoon:

Festival-goers were evacuated this afternoon (Sunday, July 13 at 4:45 PM, ET) from the event grounds and were directed by staff and New York State, Ulster County and Saugerties town officials to seek shelter in vehicles until the storm safely passed. "Our first priority is always the safety of our fans, artists and staff," said Jonathan Fordin, partner of MCP Presents, the promoter behind THE HUDSON PROJECT. "We regret having to cancel any performance, but safety always comes first."

This caused sets from Action Bronson, Cults, STRFKR, Bassnectar and more to be cancelled. Did you go to any of the three days? What was your experience like?

The first year of The Hudson Project was partially to "replace" MCP Presents' other festival, Camp Bisco, which took 2014 off. Bisco promises to be back in 2015 though.

Watch a video of The Flaming Lips at the festival, below...