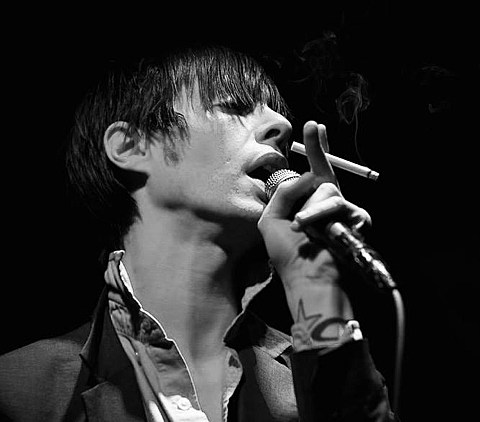 LA band The Icarus Line have been active since the late '90s, with releases on Crank!, Hellcat and more. They've gone through various lineup changes, at times including current or former members of Toys That Kill, Ink & Dagger, Nine Inch Nails and F-Minus, with frontman Joe Cardamone as the only constant member. This week (10/2) they'll release their newest album All Things Under Heaven on American Primitive, and we've got the premiere of new single "Solar Plexus" ahead of the release. It's psychedelic rock with an emphasis on the "rock." Flower power this is not; it's dark, devilish stuff, with maybe a little Nick Cave influence. You can watch that video (shot and edited by Aric Lorton), plus the video for another album track "Ride Or Die," below.

The Icarus Line will go on tour later this year, opening for former Stone Temple Pilots frontman Scott Weiland. The tour hits NYC on November 25 at Gramercy Theater. Tickets for that show will be on sale soon.

UPDATE: The two artists also play The Paramount on 11/29 and Scott plays Wellmont Theater on 11/28 though The Icarus Line do not appear to be on that one.