The Intelligence @ Market Hotel in 2009 (more by Tim Griffin) 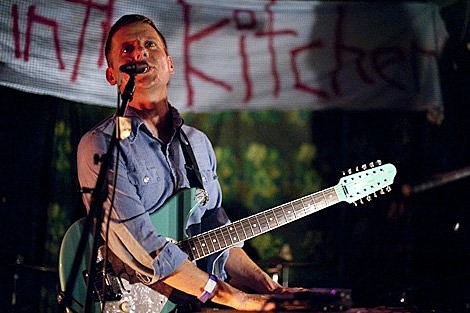 One of Seattle's finest, The Intelligence, have a new record and are gearing up for a big fall tour, including an October 30 stop at Cake Shop and will also play the Todd P Halloween Show somewhere in Brooklyn, details TBA. The band were last here about a year ago supporting one of 2009's best albums, Fake Surfers.

Its follow-up, Males, is the band's sixth album (third for In the Red) but marks a couple of firsts for the band. It's the first Intelligence album that wasn't played entirely by main brain Lars Finberg and marks a bold leap into fidelity. Scraping off the scuzz hasn't removed any of the band's weird charm -- Males is quite possibly their best album yet. (And Fake Surfers was hard to top.) You can download "Like Like Like Like Like Like Like" at the top of this post.

Finberg discusses  these new developments in the Intelligence's sound in a very entertaining interview over at The Finest Kiss:

I'm weakening, I'm lonely. It's more fun to make something with everybody else now, it's new. My ears are just tired of the 'LO-FI' sound for us, I'm also sick to death of being called that, it's stupid but nothing gets called mid-fi or hi-fi, such a tired and petty complaint I know. I thought the most interesting thing we could do would be to try to make a big clean record. But really it's just the most interesting path to go down for me, we can record on dirty blank cassette tapes forever, it's easy but the challenge of having real bright vocals up front was scary and fun. Also our bass sound is cool with Susanna I wanted the record to have a lot of low end. Beren is a great drummer and we wanted a record with US as a band playing, since the 3 of us have been together a long time now it's just more fun to have something we make as a group. Plus if it sucks it's THEIR FAULT TOO.

Hi-fi or lo-fi, you seem torn between them (ie. Surfers vs Pacman). What is your preference and has it changed over the years?

It's Hi-Fi for now, I want our records to sound good with the windows down! I want it to sound good on a P.A. in a club and DJ's to be able to play it next to Adam Ant and the Buzzcocks without people involuntarily grinding their molars.

If the new album isn't enough Lars Finberg for you, he's got a side project, Puberty, you might want to investigate.

Meanwhile, Finberg's old band, the under-appreciated early-'00s A Frames, have come out of retirement -- albeit without him. (He left the drum stool in 2006.)  Earlier this year saw the release of 333, an odds-n-sods triple platter of 7" sides and demos and with it came some new shows.

A Frames are making it to the East Coast in October, playing Cake Shop on 10/8 and Death by Audio on 10/9. They also play Philly on 10/7 at the Danger Danger Gallery. Video from a recent show in Seattle is at the bottom of this post

All Intelligence and A Frames tour dates below... 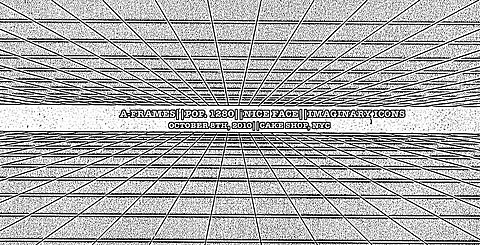 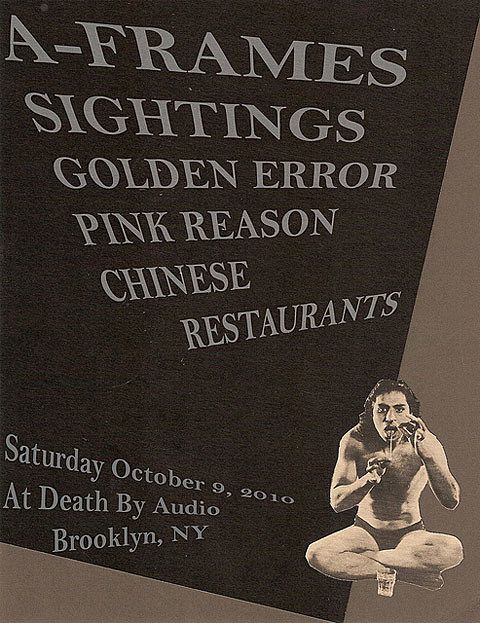