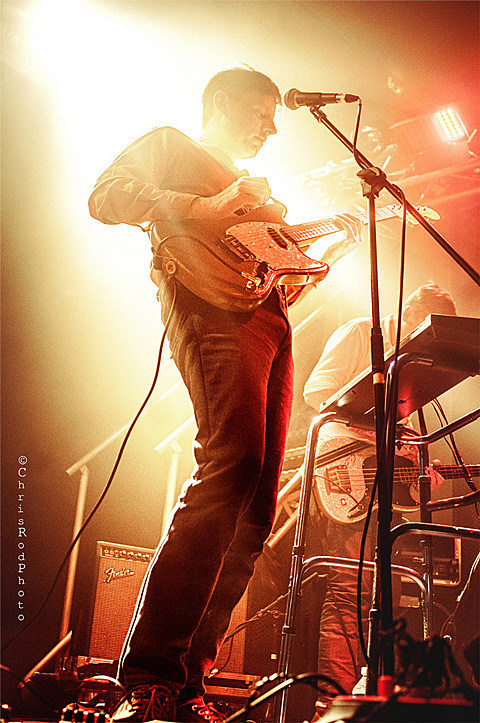 It's been almost three years since The Intelligence's last album, Everybody's Got it Easy But Me. What has Lars Finberg been up to in the interim? This year saw the reissue of The Intelligence's first album, Boredom & Terror, on double vinyl (the original CD's bonus disc is now the second platter), which is well worth picking up. You can stream it via Spotify below. As for what else, there's lots going on, including a new album, and we'll let Lars fill you in on all that:

We are fresh home from our "Is it possible to tour Europe on the 'deluxe' reissue of our first LP "Boredom and Terror"? (the answer is a resounding 'somewhat") and Petey Dammit from Thee Oh Sees joined us as a guitarist/stylist.  Our new LP Vintage Future is recorded (by Chris Woodhouse and featuring friends from the The Shins/Thee Oh Sees/Sic Alps/Wounded Lion/The Mallard/Mayyors) and currently being mastered for an April release on In the Red Records, preceded by a 12" single/EP called "Cleaning Lady." Then the bench will be warm enough for us to start touring/hawking t-shirts in the spring.

Keep your eyes peeled for more details on Vintage Future and The Intelligence's tour plans (they were last in NYC during CMJ 2012).

While Lars was filling us in on the new album, he also gave us his Top 10 of 2014. It's a mix of albums, movies, books and shows, and not all of it was actually released this year, but he makes a good case for all of it with commentary below.

The Intelligence's Lars Finberg - Top 10 of 2014
Dylan Shearer - Garagearray - Newer solo dude from San Francisco, has a couple of records out, came into this as we played with him and is now backed by Noel Von Harmonson (sic alps) on drums and Petey Dammit (thee oh sees) on bass. Deep chilling Sid Barrettey / Kinksy tapas that doesn't sound like but gives me a Television Personalities vibe in that it sounds so intimate and true I feel like I'm eavesdropping on something to private but I can't stop.

Frank (movie)- Don't let the mask/paper mache head scare you. A very cool movie with shockingly great music that taps the indescribable / undesirable corners of trying to make something. And gently knocks on a nice failure/success chord too. If you are a normal person who thinks M. Fassbender is crushing it these days this one continues the string and he has a great voice.

The Rover (movie) - Yikes, I don't know what you want from modern movies but cripes this might be it. Guy Pierce's eyes can cripple more than any dialogue could. I did not remotely recognize the derelict weirdo as Robert Patterson from Twilight and he should get an award for such a transformation in the film equivalent of the Birthday Party song "Mutiny in Heaven" (or pick your own esoteric Australian reference).

John Coltrane - Winner's Circle - Never heard of this crazy lil record. I never talk like this trust me but I was struck by how 'warm and roomy' (a.k.a. 'recorded in a big live room') it sounds, particularly the drums. Sad vs. Light vs. Dirgy vs. Bouncy. It's nice and all over the place in a strict 1957 way.

The Goldfinch (Donna Tart) - My dad said 'oh if you want to read about drugs...' and offered me this before a flight. I enjoyed it even though it took me months to get through the first part because it's like taking a warm bath, it feels amazing but I don't know what to do in it so I kept jumping out. Eventually I dug in and loved it and the momentum it builds makes you nervous when the pages (finally) get thin.

Jacco Gardner - Cabinet of Curiosities - If you like Zombies and Love and Piper at the Gates of Dawn like everyone does/should it's a sweet little record. A shame everyone can't hear it for the first time at night in 110 degree Palm Springs in a 90 degree pool.

Ex Cult - Midnight Passenger - My introduction was watching a friends scrappy cell phone video of a minute and a half of the song 'midnight passenger' live from the awesome rathole Saturn bar in New Orleans about 10 times. Answering my own 'what loser would ever watch this' when someone cell-films a band.

Julian Casblancas and the Voids - Tyranny - I'm just cracking into this one but just the first song "take me in your army" is sick and brimming with all the ideas and vibe that seemed missing since he stopped writing all the parts/songs for the Strokes. (my theory). There's failure and melody all over the place and it's a mess and it sounds refreshing. I'm impressed.

Balkans - "self titled" - If no one has heard of the late/great Seattle band Popular Shapes I would describe these guys as a little bit Yummy Fur/early Franz Ferdinand music with a singer like if Jonathan Richman was Eddy Grant.

Devo "Hardcore tour" - Opening with jokes/routines and 'mechanical man' and glacially, but with power, ramping up to costume changes and "uncontrollable urge". When the director's commentary in real time, the genesis and layering of 'Satisfaction' I almost exploded. It was incredible and inspiring to watch them rip and laugh and enjoy themselves to a choir of special nerds.

Cait Le Bon - Cyrk - My favorite new thing. Romantic and soothing and tough. Like an outdoor shower after a 25 hour flight where you are not quite sure no one can see you naked. F*ck it.