DOWNLOAD: The Intelligence - Thank You God for Fixing the Tape Machine (MP3) 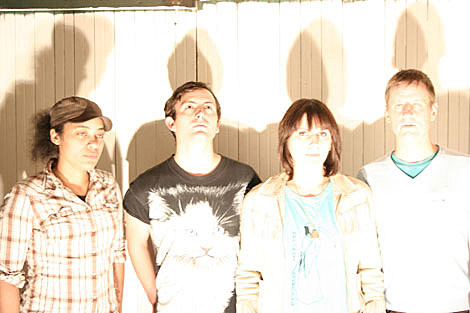 If I wasn't so enthralled with the show, I would have gone out and dragged everyone of those pedestrians into the bar, because the Intelligence were putting on a clinic. They were tight, and tightly wound, piercing and fractured in all the right ways. Before blasting into Universal Babysitter, Lars Finberg, responding to someone's earlier comment that they sounded like The Ventures quipped, "now this one sounds like the Ventures." Along with a lot of other things, the Intelligence have a twangy surf sound that is reminiscent of that Tacoma band. Finberg also has this uncanny ability to write songs that are so out there, but seem to constrain themselves to the unwritten rules of the pop song. It's probably not a formula for becoming huge, but he at least has the undying fandom of like-minded warped-pop nerds like myself.
[The Finest Kiss]

Portland Seattle's The Intelligence will soon hit the road on a massive North American tour that will take them pretty much everywhere, including two dates in the NYC area: September 11 at Market Hotel and September 13 at Cake Shop. If you haven't heard their new album, Fake Surfers, you're missing out on one of the year's best albums. While lumped in with the surf/garage/trash scene -- they are on In The Red, home of Thee Oh Sees, Hospitals, Vivian Girls, etc -- the Intelligence have been doing it longer (10 years) and weirder than almost anybody else. Main brain Lars Findberg, who was also in the A Frames, has a warped sensibility that makes Intelligence records more than just catchy little surf jams with blown-out levels. (Not that there's anything wrong with that but one look at the new album title lets you know their aware of their genre.) Fake Surfers might not offer the immediate punch of the new Oh Sees and Ty Segall records (both of which are very good) but it will stay with you longer. Check out the MP3 of Fake Surfer's "Thank You God for Fixing the Tape Machine" at the top of this post. It would be too easy to say that The Intelligence are more cerebral than other bands doing similar things, but it would also not be wrong. They also rock.

The Intelligence actually have two new albums, the second being Crepuscule With Pacman on French label Born Bad which is a decidely stranger, more lo-fi affair than the comparitively-friendly Fake Surfers. And there's a new In the Red 7" coming soon featuring a different version of Fake Surfers' "The Unessential Cosmic Perspective" and three leftovers from the album's sessions.

Tour dates and a video (from thier 2008 album, Deuteronomy) after the jump...