Albini & BUB: "No, that is not the microphone Gavin Rossdale used..." 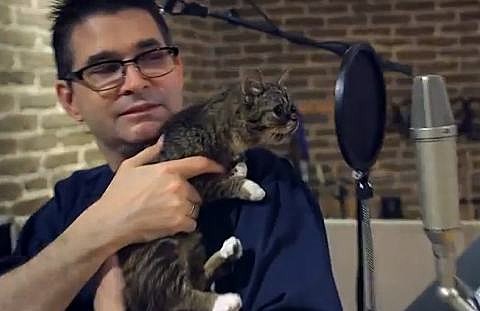 Sure you can look at cats on the internet. You probably just were. But isn't it fun to look at internet videos of cats on a big screen in a big room with lots of people? That's the idea behind The Internet Cat Video Film Festival which comes to NYC at Warsaw on October 25. In addition to lots of internet cat videos, one of the web's most famous cats, Lil BUB, will be there in the flesh. Also there: Supercute! who probably have songs about cats. Tickets are on sale now.

Speaking of Lil BUB, you have probably seen the video of him meeting the other most famous feline on the internet, Grumpy Cat, over the summer. If not, you can watch that meeting below. Meanwhile, on the latest episode of his web talk show (shades of Space Ghost), Lil BUB chats with another legendary grumpy cat, indie rock producer Steve Albini (who is probably grumpy that we referred to what he does as "producing"). You can watch that below too.