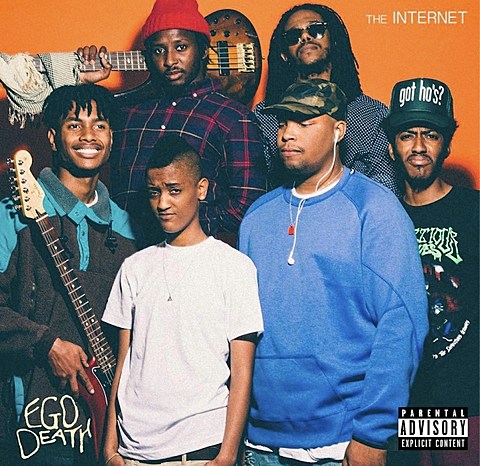 The Internet, Odd Future's neo-soul/alt-R&B group, released their new album Ego Death this week, featuring Janelle Monae, Vic Mensa, James Fauntleroy, Kaytranada and Tyler, the Creator. If you haven't heard it yet, check out a Spotify stream of the whole album and the video for the Kaytranada-featuring "Girl," below.

The Internet played three NYC shows in support of it earlier this week, Madiba Harlem on Monday (6/29), Baby's All Right on Tuesday (6/30) and opening for Basement Jaxx in Central Park last night (7/1). They've got one more NYC celebration planned, happening at Baby's East Village sister venue Elvis Guesthouse TONIGHT (7/2) for a late-night 11 PM show. Tickets are on sale. Their only other show announced at the moment is LA later this month with Cut Chemist and Shura.

Other Odd Future members Mike G and Left Brain will be in NYC the following week, playing the Marlin Room at Webster Hall on 7/9 with Speak, Pyramid Vritira, Mind Gone Larry, B.I.C. and HOA Bossman. Tickets are still available.

Tyler, the Creator will be here for the Mad Decent Block Parties in Coney Island's MCU Park on August 8 & 9. He plays day 2, with CL, Grandtheft, Party Favor, What So Not, Jack U (aka Skrillex & Diplo) and new additions iLoveMakonnen, Knife Party and Gorgon City (DJ). Day 1 has Cashmere Cat b2b Trippy Turtle, Die Antwoord, Gent & Jawns, Major Lazer, Vic Mensa, new additions Lunice, Tommy Trash, Yellow Claw, and one more TBA. Two-day passes are sold out, but you can still get single-day tickets for the block parties.

Odd Future's Earl Sweatshirt is also touring in support of his excellent I Don't Like Shit, I Don't Go Outside, and hitting NYC on August 22 at Best Buy Theater with Remy Banks. Tickets are still available.

And lastly, you may have heard recent news that Tyler tweeted Odd Future is "no more." The most recent development came when The Internet's Matt Martians talked to AllHipHop:

"I watched Tyler's interview with Hot 97. Basically, what he meant is that we don't hang out everyday," says Matt. "That's literally what he means. If Earl [Sweatshirt] saw Tyler today, they would give each other the biggest hug."

Matt insists there are no hard feelings among the members of OFWGKTA, but the producer does acknowledge Odd Future affiliates have broken off into separate camps.

Considering most Odd Future releases have been by the members' individual projects anyway, the news just seems to be -- as Earl Sweatshirt said -- "solidifying the obvious."

The Internet video and album stream below...