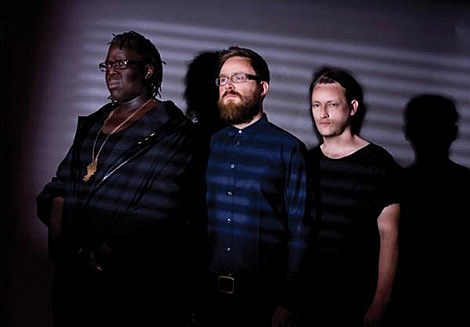 While this year's Mercury Prize winner Speech Debelle canceled her CMJ appearances last week due to Visa issues, one of her fellow Mercury nominees, The Invisible, have managed to get their ducks in order and will be playing three NYC shows next week: a free show at Brooklyn Bowl on Wednesday (11/4), Santos on Thursday (11/5) opening for Dragonette, and Friday (11/6) at Pianos.

The Invisible were named part of Drowned in Sound's "DiS Class of 2009":

As far as new band recommendations go, if avant-garde electro-whizz Matthew Herbert's into it, rest assured you're looking at something interesting. The Invisible, then, are set to release their eponymous debut album via his Accidental label this March and as calling cards go, it's shaping up to be one of 2009's finest. Dave Okumu, Leo Taylor and Tom Herbert (no relation) began playing together as 2006 drew to a close, with a joint pedigree taking in the likes of Zongamin, Gramme and Jade Fox. It's no surprise, therefore, that what was initially intended a project to showcase the rich, soulful vocals of Okumu soon flourished, blossoming into a collaborative effort every bit as exciting as you might imagine. Choppy guitars, a glossy studio sheen and sparingly dropped samples cosy up with aforementioned vocals, predictably seeing the term "British TV On The Radio" excitably bandied around - and as unimaginative a journalistic ascription that may be, it's one that really does make sense in this instance.

The Guardian adds this:

The Invisible also make connections between types of music previously considered irreconcilable - we can hear elements of space-prog in some of their freakier moments, and of Brit-funk on their forthcoming single - but they do so in a more focused way; that single has enough pop appeal and fabulous funk-tionality to be a hit. They also tend not to do what BLK JKS do, which is to offer a hazy maze of different genres often within a single track; instead, the London trio have a sort of one-style-per-song (or, at most, two-style clash per song) policy, so that, for example, Sinister Cat sounds like you always imagined mid-period Can would, Monster's Waltz suggests AR Kane jamming with Parliament while London Girl - the single of the year so far, folks, accompanied by a terrific arty shape-shifting black-and-white video worthy of Godley & Creme - reminds us of nothing so much as the capital's underrated, long-forgotten early-1980s Britfunk crews such as I Level or Light of the World circa their signature tune London Town. We've even heard it compared it to Ian Dury & the Blockheads; there's a similar warmth and easy-going charm to their brainiac forays. Is that a clavinet we hear before us? We sincerely hope so.

The video for "London Girl" and all Invisible 2009 tour dates are below...