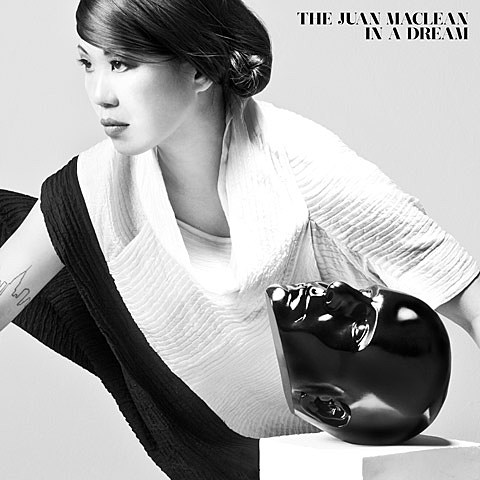 The Juan Maclean will back with a new album, In a Dream, on September 15 via DFA. It's their first since 2009's The Future Will Come. That's the cover art above featuring Nancy Whang who is, if the press release is to be believed, truly front-and-center on this new album. Where her style in the past has always been detached cool, Whang gets emotive this time out. You can get a taste of that on first single "A Place Called Space" which, with its arpeggiated lines and solo-ing guitars, sounds maybe just a little like the Miami Vice theme. Stream that below.

While no live performance dates have been announced, The Juan Maclean maybe soon be DJing at a venue near you. They'll be DJing Brooklyn club Verboten on June 26 with onetime DFA associate Tim Sweeney. Tickets for that Verboten night are on sale now. They'll also be DJing at Output on August 16 for the afternoon "Kaviar Disco Club" party on their roof with Beto Cravioto and Travmatic also on the bill. Tickets for Output are on sale as well.

Meanwhile, Nancy will be DJing without Juan at Brooklyn Bowl on July 5 with Danz of Computer Magic. That begins around midnight and tickets are on sale.

All Juan Maclean DJ dates are listed, along with the new song, below...

The Juan Maclean - In A Dream tracklist
1. A Place Called Space
2. Here I Am
3. Love Stops Here
4. You Were a Runaway
5. Running Back To You
6. I've Waited For So Long
7. Charlotte
8. A Simple Design
9. The Sun Will Never Set On Our Love