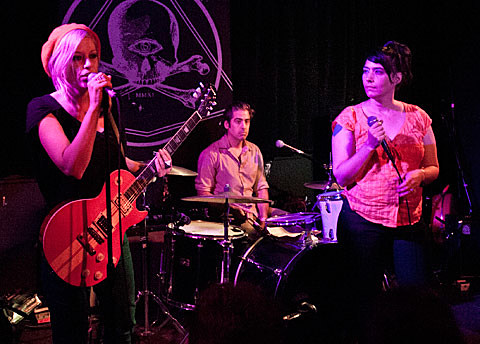 As mentioned, Kathleen Hanna's new band The Julie Ruin will release their debut album, Run Fast, on September 3 via their own TJR Records (distributed by Dischord). The band played their second show ever in Brooklyn as part of the Northside Festival earlier this month, and they've since been announced for Austin's Fun Fun Fun Fest, which goes down this November.

The band are promising more dates to come, and while we're waiting on what may be a full tour announcement, they did just announce that they'll play another NYC show on their record release date (9/3) at Bowery Ballroom. The show will be opened by Brooklyn pop punks Swearin', which makes for a very good bill. Tickets for that show go on sale Friday (6/28) at noon with an AmEx presale starting Wednesday (6/26) at noon.

UPDATE: The Julie Ruin announced a full tour. All dates are listed, along with the also just-announed tracklist for their album, below.

You can also catch Swearin' for free (RSVP required) at House of Vans on August 15 with Kid Dynamite, Joyce Manor, and Red Hare. RSVP for that show opens on July 29 at 9 AM EST.

All currently known Julie Ruin dates are listed, along with a stream of their single, "Oh Come On," below...