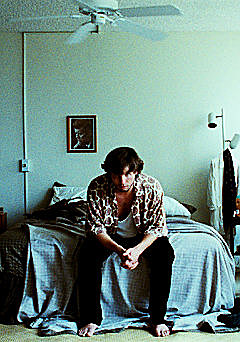 "The Killing of John Lennon," which took a Special Jury Prize at the 2007 Tribeca Film Festival and was picked up for American distribution by IFC films, opens at the IFC Center on Wednesday. "All Chapman's words are his own," declares a preliminary title in Mr. Piddington's film. Extensive first-person narration by Mr. Bell as Chapman (the actor's prior credits are, not surprisingly, mostly confined to voice-over work) is apparently culled from Chapman's own journals. But the Beatle-killer's feature-length monologue is itself peppered with quotes from "Taxi Driver," "Apocalypse Now," and, of course, J.D. Salinger's "Catcher in the Rye." It would appear that Chapman's head was not exactly buzzing with original ideas. [NY Sun]