photo: The Kills at Bowery Ballroom in 2014 (more by Ebru Yildiz) 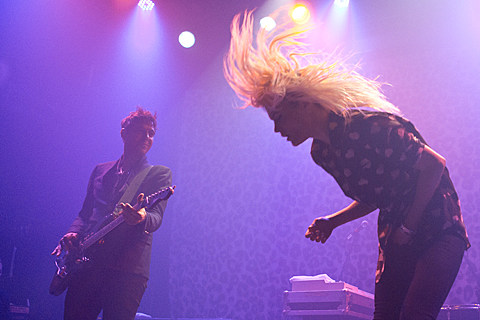 The Kills are touring this year, hitting a few festivals like Seattle's Capitol Hill Block Party (with TV on the Radio, Built to Spill, The Julie Ruin and more), Montreal's Osheaga (with St. Vincent, Kendrick Lamar, Weezer and more), and DC's Landmark (with Drake, The Strokes, Alt-J and more).

Two days before Landmark, The Kills will stop in NYC for a club show happening September 24 at Warsaw. Tickets for that show go on sale Friday (5/8) at noon.

Kills singer Alison Mosshart contributed to the recently-released Re-Licked album by Stooges guitarist James Williamson, which featured re-recordings lesser-known Stooges songs with guest vocalists. Alison also sang live with him, and a video of the full show premiered via Yahoo Music. You can watch that, with the list of Kills dates, below...