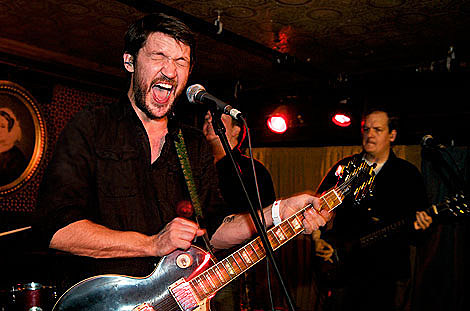 On March 1st, Saddle Creek and Cursive began offering Cursive's new album Mama, I'm Swollen as a digital download for only $1 through the Saddle Creek website, launching a special promotion to allow fans to buy the album early at a lower cost. For eight days, the new album was available as a digital download at a pro-rated price that increased by $1 each day (i.e., the price is $2 on March 2nd, $3 on March 3rd, $4 on March 4th, etc.). When the record hits stores on March 10th, the digital album will then remain at the regular price of $9.

The band will be on the road during March, playing eight shows around the release of Mama, I'm Swollen and leading up to multiple performances at SXSW.

The first of Cursive's eight pre-SXSW shows is the sold out performance at Music Hall of Williamsburg in Brooklyn tonight (3/9). The King Left and Peasant are opening. The second show, also sold out, is Tuesday at Bowery Ballroom where Bear Hands and Mañana are opening.

One of Cursive's SXSW performances will be at the free BrooklynVegan day party at Radio Room in Austin on March 19th (that Thao is also playing). More details TBA. Another one of their SXSW shows is the party The Van Pelt and Frodus are reuniting at. All Cursive dates below...