Talking Heads at The Kitchen in 1976 (photo by Kathy Landman) 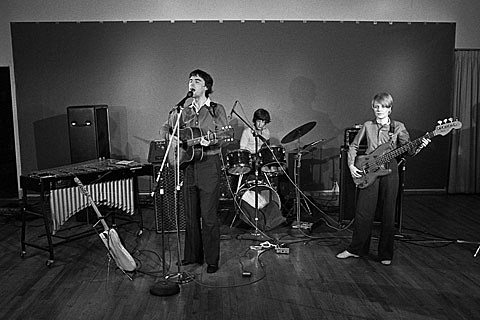 On the occasion of The Kitchen's 40th Anniversary, legendary experimental musician and composer Rhys Chatham curates a shared program of music from his time as a performer and music curator at The Kitchen during the 1970s. Avant-garde luminaries Tony Conrad, Pauline Oliveros, Joan La Barbara, and Laurie Spiegel will return to The Kitchen's stage and perform the now canonical experimental music pieces they debuted at The Kitchen in the 1970s, an incredibly fertile and experimental period in New York when these pioneering artists helped create the original "downtown sound."

Congrats to the legendary Kitchen for on their 40th Anniversary! Come celebrate the venue over two nights, Friday 9/9 with Pauline Oliveros, Joan La Barbara, and Rhys Chatham and Saturday 9/10 with Tony Conrad, Laurie Spiegel, and Rhys Chatham. Tickets for both nights are still available by phone or by foot, and will set you back $12 each.

A week after that you can continue withe the celebration at the annual Kitchen Block Party on 9/17, a FREE street fair that goes down at 11AM - 4PM on 19th between 10th and 11th Avenue. Come check out multiple art booths, live music & dance, kid friendly activites, and much more. More details on the block party, as well as a short documentary on the significance of The Kitchen, below...

--
A Place for Artists: Reflecting on The Kitchen at 40