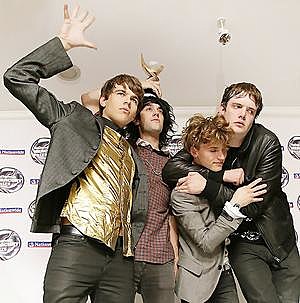 First they get to open for Bjork, and now this! I guess I'm not the only one who's confused though.

In the weeks leading up to the awards ceremony, frontman Jamie Reynolds had admitted the band were "bewildered" by their nomination alongside the likes of last year's winners Arctic Monkeys.

But the "New Rave" group, who only formed two years ago, were not the only ones to raise an eyebrow when their debut Myths Of The Near Future scooped the £20,000 prize.

"Klaxons winning came as a total surprise, and it demonstrates once again that it's pretty impossible to second guess the judges, who always love to confound the pundits and show that they're independently minded," says HMV's Gennaro Castaldo.

Then again, I'm not sure who deserved it more.