Andrew McKenna Lee of the Knells; photo by Ron Silver 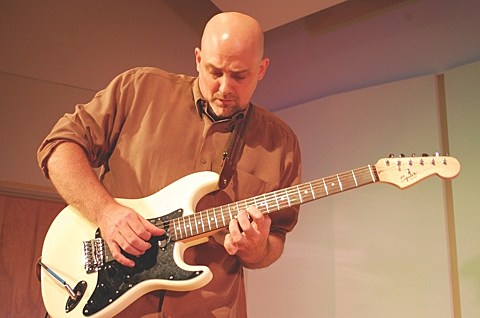 The Knells is a new group fronted by guitarist and composer Andrew McKenna Lee. Three female vocalists, another guitarist, two drummers, a bass and the Mivos String Quartet round out the ensemble, and the group's debut, self-titled LP is out now on New Amsterdam Records. As the Knells' Soundcloud describes it, their sound is "post rock, neo-psychedelic chamber prog," which is a fairly accurate assessment: the LP is lushly populated by spacey guitars, intricate vocal harmonies and knotty prog-rock breakdowns. You can hear it streaming below.

The Knells play an album release show in NYC on December 10th at SubCulture, with ambient duo itsnotyouitsme (Caleb Burhans and Grey Mcmurray). Tickets for that show are on sale now.

itsnotyouitsme have a new disc of atmospheric compositions out on New Amsterdam titled This I, featuring guest spots by vocalist Theo Bleckmann and bassist Skúli Sverrisson.

Hear both records below...