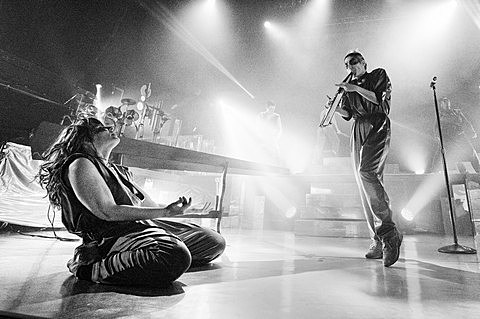 The Knife returned in 2013 with Shaking the Habitual, their first album since 2006, and went on their first North American tour in forever in support of it. Now, the band have sadly announced that following their European tour this fall, they'll be calling it quits. In a new interview with Dazed, the band said, "We will close down, it's our last tour. We don't have any obligations to continue."

In the autumn we will round up the Shaking The Habitual Show Tour with a number of European dates. After the touring last year we reworked the show during the winter. The performers, previously known as dancers, learnt how to sing and play instruments, the stage got three levels, Shannon Funchess joined us and the show became more fun and shiny. We performed it in the US in the spring and now we would love you to join us in our dance for some last shaking moves.

See you on the dance floor...

/Olof and Karin, The Knife

All remaining The Knife dates are listed below...