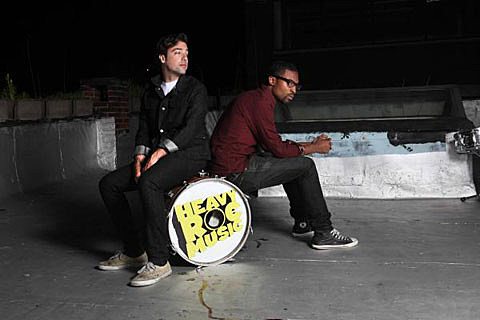 "I DJed a show with DJ B-Roc of The Knocks a few months back. Dude was on point and I was blown away. Unsurprisingly, the highlight of the set came when B-Roc dropped his group's new single "Make It Better." The song is so dope, so summery, so perfect. And you can download it now at the Neon Gold blog. Be sure to pre-order the single so you can cop all of the remixes when they drop." [Panda Toes]

NYC's The Knocks are listing "NYU w/ Mystery Guests (dj set)" happening on September 7th on their tour dates. That would be the annual NYU Mystery Concert which I accidentally revealed will also include a set by certain member of Outkast on the bill.

The Knocks then have a few other scattered dates scheduled before CMJ, and then at least three scheduled during CMJ including the just-announced late show happening at Bowery Ballroom on Wednesday, October 20th with DFA's Holy Ghost. Tickets for that show will go on sale Wednesday, 9/8, at noon (or you can try to get in with your CMJ badge).

If you can't wait that long to see Holy Ghost!, don't forget that they also happen to appear on the lineup of this weekend's final 'Warm Up' of 2010 at PS1:

The Knocks also list two other CMJ shows already. One is a Neon Gold / Chess Club showcase happening at Public Assembly on October 21st and the other is an NME show happening at the Studio at Webster Hall on October 23rd.

All dates for the Knocks & Holy Ghost!, below...