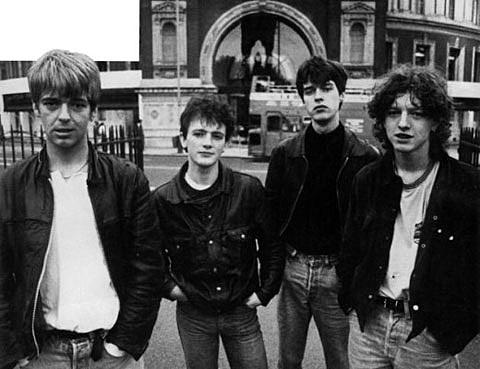 Liverpool legends The La's will play their first American show in 21 years on March 12 at Webster Hall. Tickets ($25) go on sale Thursday (12/22) at noon. The show is part of the first-ever NYC extension of Liverpool Sound City festival. More bands are playing, and the line-up should be announced early January.

With songs like "There She Goes," "Timeless Melody" and "Way Out," one could argue that '90s Britpop started with the La's 1990 eponymous debut, an album that frontman/songwriter/perfectionist Lee Mavers didn't even want released. It was finished by producer Steve Lillywhite and disowned by the band, despite near universal acclaim. It's the only album Mavers made as the La's though there are enough demos, different versions of the LP's songs with other producers, and live tracks floating around that they filled a box set.

I don't think the La's really toured America the first time around, just some summer festivals. (Though my memory may be fuzzy about that.) Mavers reformed the La's a few times over the last decade, most recently with original bassist John Power who has since left again to reunite his post-La's band, Cast, whose new album is out in February. It's unclear who the members will be in March.

The NYC edition of the Sound City is part industry conference and part music fest. From the initial press release:

The inaugural New York Sound City (NYSC) will take place on Monday 12th March 2012 as a one day and night music event.

Designed by Sound City (the team behind innovative boutique events in Dubai, Norway and their home city of Liverpool) NYSC will feature key public and media partners from both the UK and US.

"Sound City has established itself as the coolest city centre festival and business conference in the UK. In the short space of 4 years we have delivered our bumper boutique events in Norway, Dubai, Texas and our home city of Liverpool. The UK businesses, individuals and artists we have showcased and assisted have gone onto generate over £12 million of real money for the UK music and digital economy. We do not mess about. For us to partner up with New York is the next logical step. Liverpool and New York have always shared a special relationship with each other. Two of the worlds biggest cities and both synonymous with art, music and pop culture. This is the first announcement in what is going to be an exciting time for the growth of our strong brand." David Pichilingi CEO Sound City

The live show will feature three UK bands (La's included) and three bands from the U.S. Again, details on that to be released next month.

Click through for some classic La's videos and live performances.