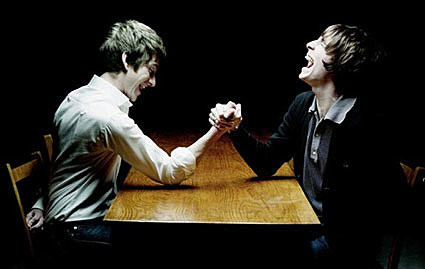 The Last Shadow Puppets are a band that currently consists of Alex Turner of Sheffield band Arctic Monkeys and Miles Kane of Wirral band The Rascals. They are due to release their debut album, titled The Age Of The Understatement on April 21, 2008 (and May 6th in the USA). The Rascals supported Arctic Monkeys on their 2007 tour of Britain. The band has posted two short videos as teaser for the album on their website including short song clips. [Wikipedia]

'The Age Of The Understatement album will be available on CD, vinyl & digital download. Tracklisting is as follows:'