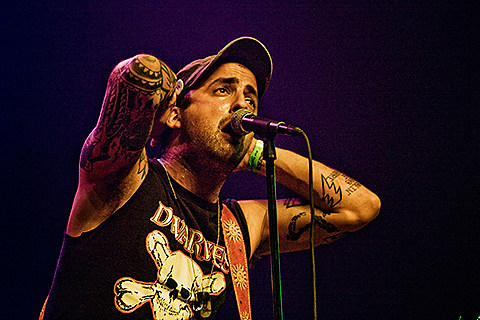 It's been eight years since Chicago punks The Lawrence Arms released their last album, 2006's Oh! Calcutta!, but they're finally fully active again and returning with its followup, Metropole, next week (1/28) via Epitaph. From the sounds of it, the time off has only been kind to The Lawrence Arms. This isn't one of those uninspired attempted-comeback albums, Metropole is up there with the band's best stuff. And if you're new to the band, it wouldn't be a bad starting point. It's full of the gruff, songwriter-style punk that newer bands like The Gaslight Anthem and The Menzingers are making, and fellow veterans like Bouncing Souls and Hot Water Music continue to churn out. Not to mention, if you dig the new Against Me! album, don't let that be the only punk comeback album you hear this month. You can stream Metropole in full below.

As discussed, The Lawrence Arms are going on a tour with The Copyrights which hits NYC on March 5 at Gramercy Theatre with Elway. Tickets for that show are still available.