The Lawrence Arms at Riot Fest 2010 (more by Katie Hovland) 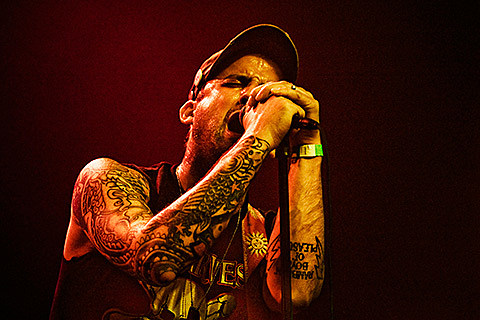 Chicago punk vets The Lawrence Arms hadn't been too active for a while, only doing a few shows a year. But earlier this year they picked back up again with more shows and they've announced that their first album in eight years, Metropole, will be out on January 28 via Epitaph. You can watch the video for that album's single, "You Are Here," below.

The Lawrence Arms play a New Year's Eve show in Chicago, and after that they'll head out on a full US tour in 2014. That tour hits NYC on March 5 at Gramercy Theatre with The Copyrights and Elway. Tickets to that show go on sale Saturday (12/28) at 10 AM with Live Nation/Mobile App/Music Geeks (password: "musicgeeks") presales starting Thursday (12/26) at 10 AM. All dates are listed below.

If you want to see Elway headline a smaller NYC show, they're at Saint Vitus on February 16 (tickets).

Speaking of New Year's Eve shows in Chicago, if you'll be in the Windy City for the holidays, check out our Chicago New Year's Eve concert guide that includes Death, Flosstradamus, Roky Erickson and more.

All Lawrence Arms dates are listed, along with the new video, below...

The Lawrence Arms - "You Are Here"