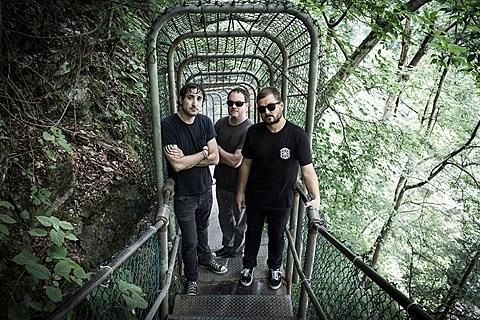 Like a handful of '90s alt rock one-Buzz-Bin-song-wonders, Superdrag were more than just "Sucked Out" and had a pretty good career that produced some worthy deeper cuts. They broke up in '03 but briefly reunited in the late 2000s, resulting in a 2009 reunion album. After that, singer John Davis formed the '80s-punk inspired Epic Ditch with alt-rock mega producer Nick Raskulinecz, and he's now fronting a new band, The Lees of Memory with Superdrag guitarist Brandon Fisher and Epic Ditch drummer Nick Slack.

The band's debut album, Sisyphus Says, comes out September 16 on digital/vinyl via melodic punk powerhouse SideOneDummy and on cassette via garage rock label/lifestyle Burger Records (side note: this means at least two '90s alt-rockers have recently joined Burger), but it sounds more like it should've come out on early '90s Creation. Though the snotty, crunchy power pop of their '90s days did have some shoegaze influence, they've fully immersed themselves in the sounds of My Bloody Valentine for this one. (Some of the material on that '09 comeback album hinted more strongly at this too.) Raskulinecz produced it. Get a taste from the Elvis Wilson-directed video for first single "We Are Siamese" (via Stereogum), below.

SideOne is also giving Superdrag's Head Trip In Every Key its first vinyl release and putting out a collection of Head Trip demos, Jokers w/ Tracers, on August 12.

Watch the new Lees of Memory video, and revisit a Head Trip track, below...

The Lees of Memory - "We Are Siamese" (Official Video)

Superdrag - "Do the Vampire"