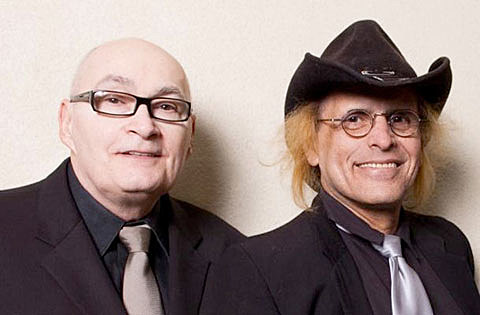 Legendary NYC baroque pop band The Left Banke reformed earlier this year, but only with original members Tom Finn and George Cameron. Unfortunately Michael Brown and Steve Martin (not that one) -- who did the songwriting and singing, aren't actually involved. Regardless, two shows happened at Joe's Pub in March. .

The show reunited original band members Tom Finn and George Cameron for the first time since 1970 and presented a powerhouse of "Baroque pop" to an audience palpably loving every nostalgic note and nuance of the songs that first came out of our transistor radios so many years ago.

Joining forces with Tom, George and [lead singer] Mike [Fontale] were Paul Alves on lead guitar, Mickey Finn and Joe McGinty on keyboards / synths and on drums, Rick Reil who is the drummer for the Grip Weeds. Anyone who knows the work of The Left Banke knows that strings were a part of their studio sound and that was not forgotten at Joe's Pub. Susan Aquila on violin and Eleanor Norton on cello provided the subtle elegance of the Baroque pop sound and completed the formula for total aural pleasure!

The crowd was respectful, perfectly quiet at all times and riveted to the stage from beginning to end. Every song was musical perfection and the audience clearly recognized and appreciated that. At times, the performers actually seemed somewhat surprised that the audience's reaction was so warm. Maybe Tom and George never truly realized the legacy of The Left Banke but I think after that night, they might finally understand. [Rob Pollack]

Check out some videos from the Joe's Pub shows below.

The Left Banke, as described above, have two more shows scheduled this summer including one on July 20 at Littlefield with The Ladybug Transistor and another on August 20 at Bearsville Theater in Woodstock, NY. Tickets are on sale for the Littlefield show and the Bearsville show.

Tom Finn recently spoke to Rock Edition about future plans for the band:

Will you continue to mainly play in New York, or do you think you'll make it out to other places?

Well, I just contacted Andrew Sandoval, who produced our CD release 'There's Gonna Be A Storm' back in 1992. I asked him if he'd be interested in getting involved and he said, "Absolutely." I told him that we're looking for a great double-bill. Left Banke/Zombies or Left Banke/Hollies or something like that.

Or even a new group. What's the name of that great new group, Sebastian somebody?

Yeah. They supposedly idolize The Left Banke, so maybe we can get on a show with them.

That would be a great fit. It makes a lot of sense.

There's another guy who really loves us from Oasis. Noel, I think. He's come out and said that he thinks The Left Banke is the greatest band ever, and that he would like to do some of our songs. So, we'll see. Maybe we can do something with them.

Sundazed reissued The Left Banke's first two LPs, Walk Away Renee/Pretty Ballerina and The Left Banke Too, earlier this year. Order the reissues on CD/LP and stream the albums at Sundazed's website or pick them up at Other Music in NYC where they are currently on prominent display.

The Littlefield show happens three days after The Ladybug Transistor finish their tour which hit Knitting Factory earlier this month. The band will go on a West Coast tour in September which includes MusicfestNW.

The Left Banke - "There's Gonna Be A Storm" at Joe's Pub