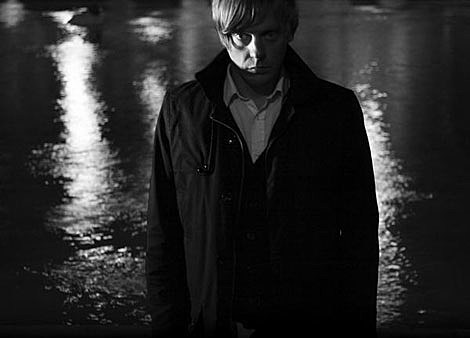 The Swedish invasion on NYC shows no signs of stopping. The latest - Stockholm's The Legends are playing NYC later this month, with three shows confirmed so far: June 23 at The Bell House, June 24 at Santos (with Blacklist) and June 26 at The Studio @ Webster Hall (with Band of Skulls). Don't be surprised if a couple more shows are announced.

The Legends, on record at least, is Johan Angergård who co-owns great Swedish label Labrador Records, home of Suburban Kids with Biblical Names (whoo just played NYC for Popfest), Radio Dept. (who also played Popfest and just released a new song) and Pelle Carlberg (who played NYC right after Popfest), among others. He's also one half of lush pop duo Club 8, as well as a member of long-running Swedish band Acid House Kings who toured the US with the Legends in July 2006.

Angergård is an '80s indie pop sponge who lists Lloyd Cole, Front 242, My Bloody Valentine, OMD and about 20 other disparate acts as influences on The Legends' MySpace page. That probably explains why The Legends can sound like a completely different band from album to album (albiet different bands influence by the '80s). Their 2003 debut, Up Against the Legends, was '60s influenced noise pop that could've been released on Creation Records in 1986; the follow-up, 2005's Public Radio explored gothy postpunk; and on 2006's Facts and Figures, The Legends went electrop pop. Angergård sheds a little light on this in an interview with The CheapPop.com:

The Legends albums follow my mood and it's about exploring new sounds. I want each album to feel like a debut album because it's a lot more interesting to do something for the first time compared to do the same thing over and over again. It keeps the curiosity alive. It even grows with every album. I'm surprised that not more bands and artists do it like that and the fact that so few bands do probably explains why album no. 3 or 4 from a band so rarely is their best.

The Legends' new album, Over and Over, is out in the U.S. on June 15 and is more an amalgam of everything Angergård has done so far than an exploration of one particular style, though it is far and away the noisiest thing he's ever done. Bright white feedback sheers off the album's two singles "Seconds Away" and the great "Always the Same" which is a duet with former Tralala singer Liane Moccia who is now in Joe & the Flying Spoons. (Spin.com has the video.) But there are also a fair amount of dreamy numbers that could've easily ended up on a Club 8 record. I think Over and Over might be The Legends' best since their first. There's a bunch of MP3s at the top of this post, including both singles from the new album and one song each from previous records.

The touring version of The Legends will be a four-piece and, given the nature of Over and Over, Angergård offers this advice via his Twitter: "Bring the earplugs!"